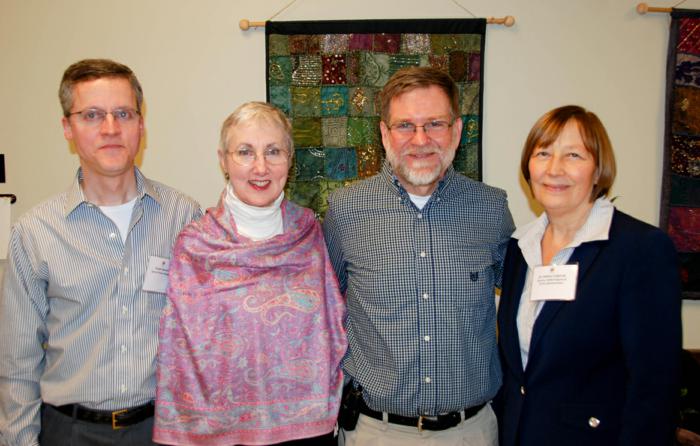 BOSTON -- Almost 100 students from across New England attended the "Called and Gifted" workshop on Jan. 30-31 hosted by the Master of Arts in Ministry Program, now part of The Theological Institute at St. John's Seminary. The two-day workshop, a program of The Catherine of Siena Institute, is a nationally-recognized three part discernment process designed to help Christian laity and clergy discern the presence of charisms in their lives.

The workshop featured presentations by Mary Sharon Moore, a nationally-known Catholic author, speaker, and spiritual director; and Charlie Hoover, who has been a "Called and Gifted" teacher and interviewer nationwide since 2007.

"It is always a blessing to touch Church throughout the U.S. in this way," said Moore, who has taught the "Called and Gifted" workshop nationwide since 2002. "The Siena Institute is dedicated to forming lay apostles, each uniquely gifted to stand in the place of Christ in the world they touch."

A real joy, she noted, has been "presenting this powerful material to lay men and women who already are in formation, through the Theological Institute, for deeper service in the Church and in the world."

Since 1993, over 75,000 lay persons, ordained, and religious Catholics and Christians all over the world have benefited from the "Called and Gifted" program.

All three parts are designed to teach students to develop charism experiments and evaluate one's results.

"We are so blessed that we were able to present the 'Called and Gifted' program as part of a series of workshops the Master of Arts in Ministry Program is offering in celebration of our 50th year," said Aldona Lingertat, the Director of The Theological Institute. "I was delighted at the quality of the speakers. Mary Sharon and Charlie spoke with humility, honesty and conviction. I found them to be wonderful witnesses of God at work in our lives."

The two-day workshop at The Theological Institute was co-sponsored Our Sunday Visitor, whose subsidy allowed students to attend the workshop at a reduced tuition rate.

More information on the "Called and Gifted" program is available at the Catherine of Siena Institute web site, Siena.org/Called-Gifted/called-a-gifted.