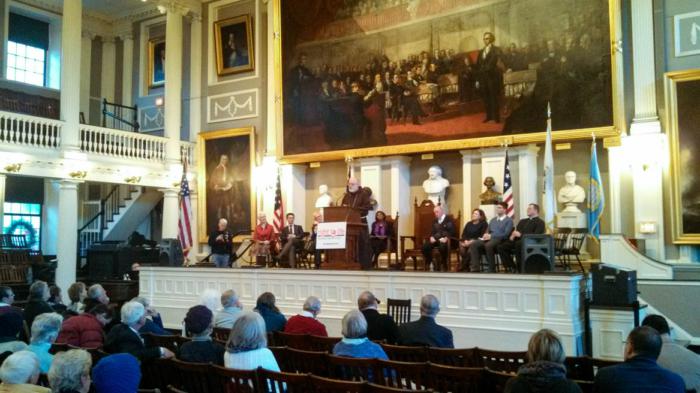 Claudette P. Joseph, host and producer of "Petra Destinee" on Boston Neighborhood Network, served as emcee for the event. She introduced Rev. Nicholas Granitsas, pastor of the First Congregational Church in Revere, who set the tone of the assembly as he read Proverbs 31:8.

"Speak up for those who cannot speak for themselves, for the rights of all who are destitute," Rev. Granitsas said.

Those assembled in the Great Hall also heard from MacKenzie Long, a senior at Bishop Stang High School and winner of MCFL's biannual 2014 Dr. Mildred F. Jefferson Youth Oratory Contest, who travelled to the National Right to Life Convention in Louisville, Ky., where he represented the MCFL and competed on a national level.

He gave his perspective as a young person in support of life, and directly took on a controversial justification for abortion.

"The most common argument is the rape argument," he said.

He admitted that, as a man, he could not understand fully the pain of a victim of rape who conceived a child, but said the act of violence would not justify the removal of a human life from the world.

"The psychological toll is unbearably difficult, but on top of this already traumatic experience adding abortion will not help," he said.

Anthony Esolen, author of multiple books, frequent contributor to Crisis Magazine and Catholic World Report, and professor of English at Providence College, gave the keynote address entitled "The Holiness of the Child."

"What must a country become, or already have become, if abortion is permitted? I don't mean to say here that there is simply evil in the world and if you perform an evil you yourself are your first and most injured victim, because that principle would apply in a healthy society as well as in a sick one," he said.

"I don't mean simply to say that such a country, a country that allowed abortion, would be sick. The question is what exactly is the sickness? I want to be careful here, because we're talking about human beings. We are not talking about machines," he said.

He said the culture that allows abortion views problems in the human body or in human society as they would a problem in a machine. If a woman has an unwanted pregnancy, society sees fit to simply clear out the womb as one might maintain a machine. Yet, he said abortion is not merely a symptom of underlying sickness.

"If abortion were made illegal tomorrow, as it ought to be, we would still be a terribly sick people. We're still a people for whom abortion is conceivable, even desirable. What kind of people are we?" he asked.

He touched on three themes in his talk related to the child, mystery, invulnerability and holiness.

He used a lesson Atticus Finch taught his children in the film version of "To Kill a Mockingbird" -- teaching his children that they must never kill a mockingbird.

"There is a mystery in that songbird, in the mere fact that it is, and that it is what it is. The mystery is not reducible to analysis by materialists," he said.

He said the lack of perception of mystery makes a pro-life argument difficult to present to an audience that wants to perceive only antiseptic facts, absent wonder and truth.

"It won't just do to prove to our opponents that baby is human. It might have done, 50, 70 years ago, but not now. Biologically speaking, the scientists, the politicians, they know that it is. They simply have lost the capacity to wonder at that truth. We are arguing with spiritual robots," he said.

On the matter of invulnerability, he said society a society promoting a utilitarian view -- particularly in education -- bypasses the idea that the vulnerable should be exempt from harm by virtue of their vulnerability.

"When you send your kids to school for outcomes, output, the more they assert their supreme authority, the more this attitude of reverence towards the guest, towards the wounded, towards the sick will appear at first incomprehensible, and then later absurd, and there is no more vulnerable and therefore invulnerable guest than the child in the womb," Esolen said.

He said the innate holiness of the child remains nearly impossible to explain to an audience that perceives no holiness in anything.

"We who do recognize it can hardly make ourselves understood. It's not so much that we speak a different language, as that we dwell in a world of spiritual depth, but their world is flat. We might as well be trying to praise the green grass to the colorblind," he said.

Cardinal Seán P. O'Malley, in remarks before closing the assembly in prayer, added another dimension to the difficulty of the situation as he pointed out that the truth often competes with mythologies of a given culture.

"Our challenge is to help our legislators to catch up with what's happening in the country, and to realize that the majority of Americans are not pro-abortion. But of course, even if 99 percent of the population were in favor of abortion, we would still need to be here, because we have an absolute obligation to defend life -- particularly when it is most vulnerable, which is at beginning of life and at the end of life," the cardinal said.