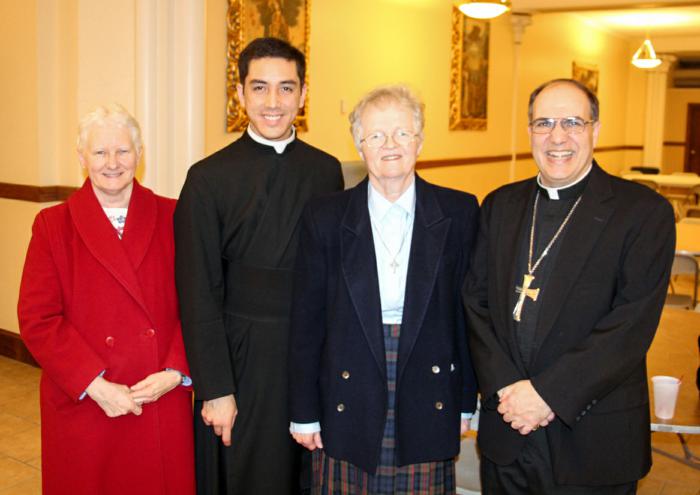 SOUTH END -- The Archdiocese of Boston launched into the Year of Consecrated Life, Nov. 30, with a Mass at the Cathedral of the Holy Cross celebrated by vicar general Bishop Peter Uglietto.

Pope Francis, who proclaimed the Year of Consecrated Life in 2013, celebrate an opening Mass the same day in Rome.

Roughly 200 people attended the Mass in the lower church of the cathedral.

In his homily at the Mass celebrated on the First Sunday of Advent, Bishop Uglietto said the season is a time of spiritual renewal in which God comes to save the faithful.

"How do I know? Why am I convinced? This faith conviction was planted deep within me early on in my life by the many religious women and men who taught me over the years," he said.

One of the religious at the Mass, Father Rocco Puopolo, SX, said Xaverian Missionaries have scheduled a monthly gathering on various themes related to consecrated life as part of the Year of Consecrated Life.

He also said he deeply appreciated the opening Mass with Bishop Uglietto as a way to see various groups of consecrated men and women of and in the archdiocese come together.

"It was a joy to be among those young and old brothers and sisters who come from a wide variety of Gospel charisms that are present and serve the Archdiocese of Boston today," Father Puopolo said.

He noted that consecrated men and women serve the poor, the prisoners, the trafficked, the homeless, the children, the aged and the young as teachers, social workers, retreat leaders, pastoral ministers and more.

"Others live a life of prayer that energizes and supports us all. Some of us have gone far beyond home to witness the power and person of the Lord Jesus in Africa, Asia or Latin America. We were all there. My faith and call to service was coached by sisters and brothers, some who still are active in ministry well beyond their formal retirement years, and I am grateful. I owe a lot to them and I joyfully share this call to consecrated living," he added.

Delegate for Religious for the Archdiocese of Boston Sister Marian Batho, CSJ, called the opening Mass "a beautiful beginning to the Year of Consecrated Life."

"We are working to be sure that we are responsive to the suggestions which have come from the USCCB," she said.

The Pilot also plans to print weekly columns from congregations of consecrated men and women in the archdiocese, and is preparing a special edition focused on the Year of Consecrated Life set to be released in February.

"I think it's a wonderful opportunity for all of us to reflect on the important role that consecrated life has in the Church," Sister Batho said.

She also said the Year of Consecrated Life presents an opportunity to speak with young people about vocations.

"It's a perfect opportunity to invite young men and women to consider or to hear God's call to them," she said.