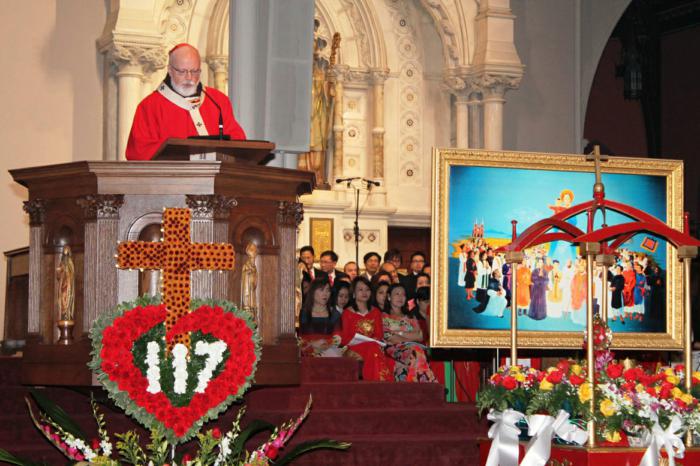 'On Sunday (11/16) I celebrated the Mass for the feast of the Vietnamese martyrs at the cathedral.' Pilot photo/CardinalSeansBlog.org

Friday (11/14), I celebrated the funeral Mass for Father Bob Boyle who had been retired for many years, but is still fondly remembered by many of his former parishioners. He had also served as the principal of Cathedral High School, among the other posts that he held during his long and fruitful ministry as a priest of the archdiocese.

On Sunday (11/16) I celebrated the Mass for the feast of the Vietnamese martyrs at the cathedral. The archdiocese is blessed with a great Vietnamese Catholic community. This year we gathered in the cathedral to remember the Vietnamese Martyrs which, as I said in my homily, could be as many as 300,000 people -- named and unnamed -- over different periods of their history. The Mass is always an extraordinary event with so many families and young children. We were also very pleased to have several of our Vietnamese seminarians serve the Mass and a number of Vietnamese priests concelebrating. Father Linh Nguyen served as something of a master of ceremonies and, following the Mass, Mr. Tran from the Vietnamese Pastoral Council spoke. We are so grateful to Father Michael Harrington, and everyone at our Office for Cultural Diversity for all their hard work bring the Mass together.

Monday (11/17) I went to Chicago to be present for the installation of the new archbishop there, Archbishop Blase Cupich. I can say that Chicago lived up to its reputation as the Windy City -- and to top it off, it was freezing cold. But, despite the weather outside, was beautiful celebration inside the Holy Name Cathedral, which is also a Keeley church like our own Cathedral of the Holy Cross in Boston, and that has been beautifully renovated. There was an enthusiastic welcome for the new archbishop, who was there with his nine brothers and sisters. The liturgy had substantial portions in Spanish and in Polish. Chicago is one of the largest Polish-American communities in the U.S., and that was recognized in the archbishop's comments, the songs and the final blessing of the archbishop gave in Polish.

Archbishop Cupich gave a beautiful reflection on the gospel, which was the reading of Jesus walking on the water. Of course, in addition to being an occasion of welcome for the new archbishop, there was also a great outpouring of love and appreciation for Cardinal Francis George who is stepping down after 17 years as the Archbishop of Chicago. Cardinal George has served the Church in many different ways and in many different capacities, including serving as the president of the U.S. Conference of Catholic Bishops. He is a great intellectual light in our Catholic Church and a man whose voice is always respected. At the end of Mass, Archbishop Cupich publicly thanked Cardinal George and there was a thunderous standing ovation. Then Archbishop Cupich said, "Now you know not just how we think, but how we feel." That just elicited peals of laughter, because whenever Cardinal George was interviewed -- and remember, Cardinal George is a very cerebral sort of fellow -- the press would always ask: "Cardinal, how do you feel about that..." And the cardinal would always respond, "Don't ask me how I feel, ask me how I think!"

Back in Boston on Wednesday (11/19), we had one of our periodic gatherings with those priests who have been ordained within the last five years. As is our usual practice, we had a Holy Hour followed by dinner and a conversation. This time, we had a long discussion about some of the themes that had been brought up at the bishops' meeting a week ago: Catholic schools, the pastoral letter on pornography that is being produced, and the Synod on the Family.