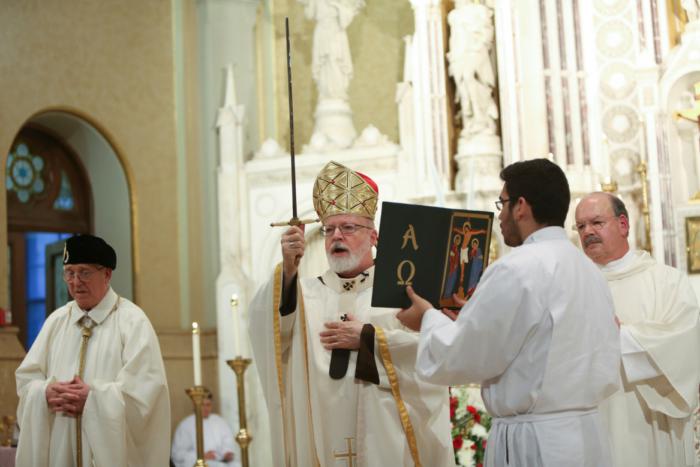 'Saturday (11/1), we had the annual Mass and Investiture Ceremony for the Order of the Holy Sepulchre of Jerusalem at the Basilica of Our Lady of Perpetual Help (Mission Church).' Pilot Photo/CardinalSeansBlog.org

... last week, we went to the house of the Sister Disciples of the Divine Master for vespers and dinner. We are very blessed to have the Sister Disciples working at the Pastoral Center in a number of capacities as well as at our Regina Cleri residence for retired priests and at their center on West Street in Boston. During the evening, they showed me the exhibit they have at the entrance to their house and we talked about the upcoming centennial celebration of the Pauline family.

Last Friday (10/31) I went to St. Paul's Church in Harvard Square to celebrate a mass with the young adult community for "Jesus in Harvard Square," part of the "Jesus in the City" series run by our Office of Lifelong Faith Formation and Parish Support. These young adult masses are most often celebrated in St. Leonard's Church in the North End but occasionally they also go to Harvard square, which is another area where there are many young people. Friday was, of course, Halloween but we were celebrating the Mass for All Saints Day. There was one of the Capuchin brothers there, Brother Andrew, and I told him, "We have the same costume!" We had a full church and it was a very beautiful celebration. The choir from St. Paul's Choir School sang for us during the Mass. They did just a spectacular job. We are very grateful to the parish for hosting us.

Order of the Holy Sepulchre investiture

Saturday (11/1), we had the annual Mass and Investiture Ceremony for the Order of the Holy Sepulchre of Jerusalem at the Basilica of Our Lady of Perpetual Help (Mission Church). There was a very large number of new members inducted, including a number of priests, one of whom was Bishop Robert Deeley. When it was founded hundreds of years ago, the order was a military organization, charged with protecting the sacred sites in the Holy Land. Today, the order maintains that tradition by supporting the works of the Church there, such as schools, clinics, hospitals, and churches. The symbolic role as protectors of the Holy Land is also carried out in other ways. For example, at the Cathedral of Notre Dame in Paris, the members of the order are the ones who take care of the important relics from the Holy Land such as the Crown of Thorns. Members of the order also join us for our celebration of Good Friday at the Cathedral of the Holy Cross, where we have a relic of the True Cross. The speaker for the weekend's installation events was Msgr. John Kozar, who is the president of the Catholic Near East Welfare Association. He addressed them about the situation of Christians and the Church in the Middle East. We were very glad to have him with us.

Tuesday (11/4) I met with Roy Peterson, the new president of the American Bible Society, and his board of directors in New York.We spoke about their plans to open a national Bible Museum in Washington, D.C. and also their desire to work closely with the Catholic Church on a number of projects.

Wednesday (11/5), we had a Mass at the Cathedral to celebrate the Campaign for Catholic Schools. The Mass marked the fact that they have raised the $8 million necessary to renovate the Lower Mills Campus of St. John Paul II Catholic Academy. Father Vin Daily, the pastor of St. Gregory's, concelebrated the Mass with me. Many of the children from the school were with us and made a wonderful contribution to the Mass -- singing in the choir, in the handbell choir and even serving the Mass. Afterwards, we had a reception to thank those who helped make reaching this goal possible.