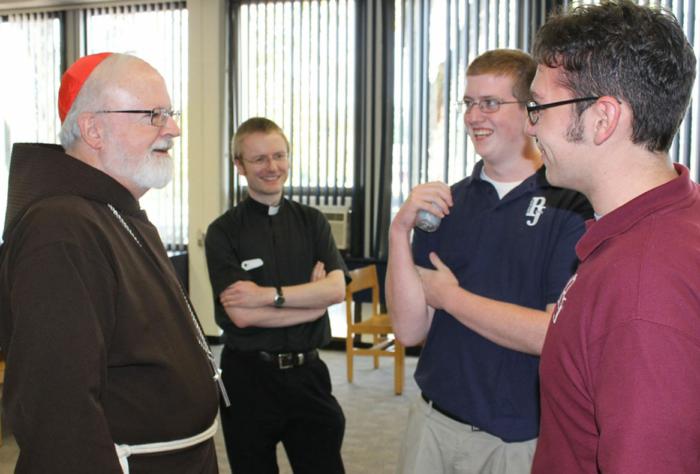 'On Tuesday (10/14) I celebrated a Mass at Pope John XXIII High School in Everett to mark the canonization of their patron saint.' Pilot photo/CardinalSeansBlog.org

The tragic case of Brittany Maynard, the young woman with terminal brain cancer who has said she plans to end her life on November 1, has touched everyone's hearts. We want to hold her up in our prayers and encourage people to pray for her and to send messages of support so that she realizes that she is not alone in her suffering and hopefully will come to see that ending her life is not the solution. One way of showing such support is through the Facebook page weluvbrittany started by a priest in our archdiocese, Father Tony Medeiros. The page allows people to send Brittany messages of love and hope. I invite you to visit the page and show your support for Brittany.

On Friday (10/10) I went with Bishop Octavio Cisneros and Mario Paredes to Sacred Heart Cathedral in Newark for the Funeral Mass of Father Benedict Groeschel, whom I have known for 40 years. Sacred Heart Cathedral is one of the most beautiful cathedrals in the United States, and so it was just an extraordinary venue for the Mass. It was a very beautiful sendoff, with many bishops, priests, religious and faithful present. Father Andrew Apostoli, one of the founders of the Franciscan Friars of the Renewal delivered an excellent homily. From Sacred Heart Cathedral we drove to Westchester Medical Center to visit Monsignor Lorenzo Albacete. It was a very moving visit with him and we were able to pray together. I would ask all of you to keep them in your prayers because his health is very poor.

Saturday (10/11), we had a Mass at St. Thecla Parish in Pembroke, celebrating the 50th anniversary of the parish. It was a lovely celebration and there was great enthusiasm on the part of the people.

Because it was Columbus Day Weekend, a special time to celebrate Italian heritage, it was fitting that I was in the North End celebrating Mass for the St. Joseph Society of Boston at St. Stephen Church. Father Patrick Universal welcomed us and Father Antonio Nardoianni, the pastor of the Churches of the North End was with us as well.

On Tuesday (10/14) I celebrated a Mass at Pope John XXIII High School in Everett to mark the canonization of their patron saint. It was wonderful to have an opportunity to greet so many of the students and see the vibrancy that pervades the school.

That evening we had one of our regular meetings of the Archdiocesan Pastoral Council. Among the subjects we discussed was the topic of vocations. We spoke about the formation of pastoral plans for the collaboratives and the need for those plans to have a clear strategy for the promotion of vocations including such things as prayer, witness and activities. Our vocations director, Father Daniel Hennessey gave us a presentation idea for promoting vocations and Sister Pat Boyle took us through how those documents are going to be prepared. We also heard from our Delegate for Religious, Sister Marian Batho, about the plans for the Year of Consecrated Life.

That evening, we had an interesting dinner meeting with the leadership of the Mormon Church, including Elder D. Todd Christofferson, who is of the Quorum of the Twelve Apostles from Salt Lake City. They came to speak to me about the recently launched media campaign "Faith Counts." The campaign has been prepared in conjunction with many different faith groups, including the US Conference of Catholic Bishops and aims to remind people, particularly young people, of the important and positive role religious faith plays in our society. The campaign will utilize the web (FaithCounts.net) and social media, including Facebook (Facebook.com/MyFaithCounts) and Twitter (@MyFaithCounts). I invite you to give them a look and spread the word!