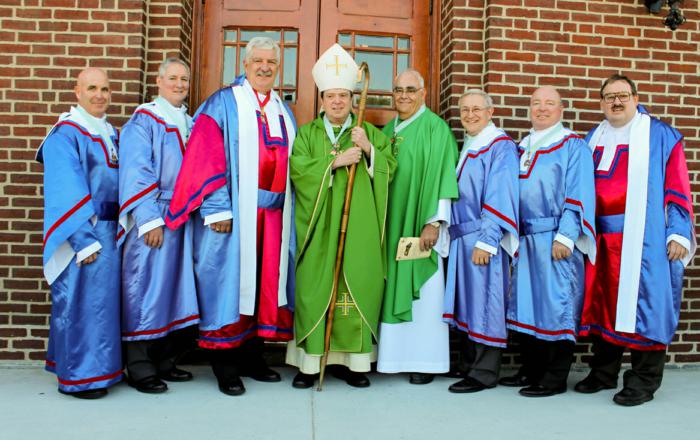 DORCHESTER -- New state officers stepped into their roles in the Massachusetts State Council of the Knights of Columbus at an installation Mass at St. Ann Church in Dorchester, Sept. 7. State Chaplain Bishop Robert Hennessey celebrated the installation Mass.

Russell Steinbach of Dorchester, the state deputy, the highest office in the state council, said the installation brought a feeling of pride in his years of service as part of the Knights of Columbus.

"I have been in the order since '94. This is the culmination of all my years," he said.

State Deputy Steinbach explained the roles of the Knights statewide officers: "State warden would be in charge of set-up, running the halls, and security. The advocate would handle all the legal problems that might come up across whatever would be in the order. The state treasurer, that's pretty easy, you do all the treasury, and then when you become state secretary, you're more like an emcee. You run everything. And the state deputy ... he's responsible for it all."

Having served at the state council in each of these roles before he became state deputy, Steinbach brings along a familiarity with the duties of the other officers under his leadership.

"You get elected as the state warden, you do two years, and you usually move up through the chairs," he said. "It's where you learn each aspect of your job before you become state deputy."

The Knights of Columbus is the world's largest Catholic family fraternal service organization with 1.9 million members worldwide, including over 40,000 Massachusetts members in 273 local councils.

The Knights of Columbus provides members and their families with volunteer opportunities in service to the Catholic Church, their communities, families and young people. In addition to protecting the financial well-being of its members, the Knights of Columbus is one of the most active charitable organizations in North America. The Knights' Annual Survey of Fraternal Activity for the year ending Dec. 31, 2013, reports that Knights donated record amounts of money and hours of volunteer service -- nearly $170 million and more than 70.5 million hours.