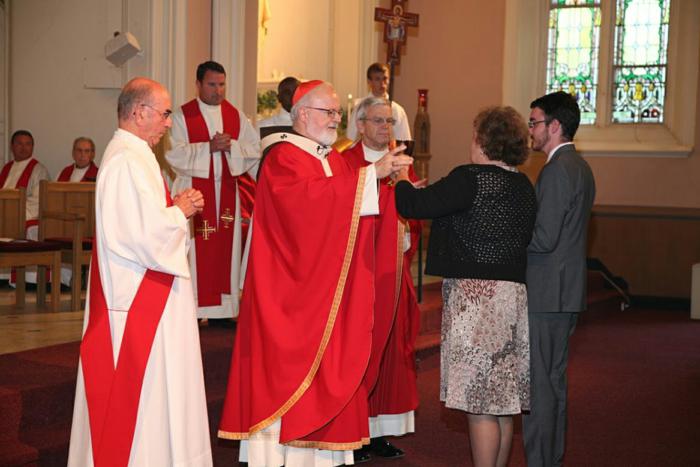 'That evening, I traveled to St. John the Baptist Parish in Peabody for a Mass and blessing of their new renovations.' Pilot photo/CardinalSeansBlog.org

Last Thursday, (8/28) I was visited by Jeff Robbins and Robert Trestan, who are president of the board and the executive director of the New England Anti-Defamation League. Also with us was Father David Michael of our Office of Ecumenical and Interreligious Affairs. We meet periodically, and at this meeting we spoke about a number of current events including a recent rise in anti-Semitic acts, particularly in Europe but also in our local area. People seem to be targeting the Jewish community to express their disapproval of what they see happening in the Middle East. Going forward, we are working to bring together a group of local religious leaders to assess the wellbeing and mutual concerns of the different faith communities they represent.

As I mentioned last week, around the beginning of September I always try to celebrate the opening Mass at each of our seminaries. So, on Friday (8/29), I celebrated the opening Mass for Pope St. John XXIII Seminary. Friday was the Feast of the Passion of St. John the Baptist. I joked with them that, when I was ordained, it was "The Beheading of John the Baptist" but political correctness seems to have crept into the liturgy. I said the next thing it is likely to be called is "King Herod's Birthday Party!"

That evening, I traveled to St. John the Baptist Parish in Peabody for a Mass and blessing of their new renovations. They very much wanted to have the celebration on the actual Feast Day of St. John the Baptist, though I was a little skeptical about the number of people who would be willing to come out on the Friday of Labor Day weekend. But my doubts proved to be unfounded. It was a beautiful celebration and they had a wonderful turnout. We blessed the new handicapped access ramp and elevator to the Church as well as the lower chapel that has been refurbished. We were honored to be joined by Peabody Mayor Ted Bettencourt, who is a graduate of the parish school, and long-time State Senator Fred Berry, who is a prominent figure in the disabilities community. It was great to see the fine job that Father John McGinnis is doing there, assisted by one of our newly ordained priests, Father Steven Clemence. They minister to the large Hispanic community at St. John's and at St. Thomas in Salem they have a very large Brazilian community. Following the Mass they had a very nice reception at the Holy Ghost society Hall.

Saturday (8/30), I celebrated my final opening Mass of the academic year at the Redemptoris Mater Seminary in Brookline. During the Mass we instituted five new lectors, which is one of the ministries or what were formerly called the minor orders. At each of the seminaries, I spoke about the three qualities that Pope Francis says attracted him to religious life: the missionary spirit, the sense of fraternity and the discipline, of the Jesuit Fathers that he knew as a young man in Buenos Aires. I pointed to those characteristics as being important in the life of any priest. Afterwards I joined the seminarians for lunch.

Monday (9/1), of course, was Labor Day. As I like to do every year, I joined in the Labor Day barbecue for priests hosted by Father Bob Casey at St. Brigid's in South Boston. I think we had about 130 priests join us, which was just a wonderful turnout. We are very grateful to Father Bob, who sponsors this gathering every year. We were blessed with beautiful weather and a good time was had by all!