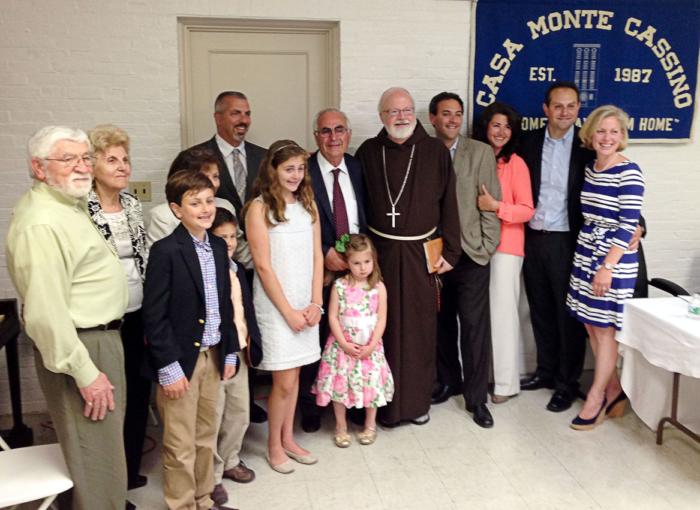 NORTH END -- Thanks to the vision of two Italian immigrant brothers, a former convent in the North End has provided a home-away-from-home for people all over the world coming to Boston to seek medical care for more than 25 years.

With the support of a local priest, Guido Vittiglio and his late brother Ferdinando Vittiglio originally founded Casa Monte Cassino in 1987 to host patients from Italy who needed access to Massachusetts General Hospital.

Vittiglio said the brothers worked in the trades and did a lot of work in buildings around the area of Mass. General. He said they would find young mothers living in basements because they had come to the United States seeking ground-breaking eye care for their children available only at the hospital, but had nowhere else to go.

Seeing the need to help, the brothers worked with the Archdiocese of Boston to acquire a former convent called the Katherine Moore House on Tileston Street in the North End. Naming it after their hometown of Monte Cassino, Italy, they opened it to those coming from Italy seeking treatment.

According to Vittiglio, the specialized medical care eventually became available in Italy. And, while that meant fewer people coming in from Italy, the need for temporary medical housing in Boston still existed. So, in 1990 the non-profit facility opened its doors to people from all over the world who sought care at local medical facilities.

Today, the facility uses three floors to provide 10 bedrooms for guests to stay during their time in Boston. The rooms are broken into four units with shared kitchens and bathrooms.

At the time of this reporting, Casa Monte Cassino was accommodating five families from five different countries with three meals a day and a place to live.

Vittiglio said the shared dream of helping people in need reflected his Catholic faith and said he was moved when Cardinal Seán P. O'Malley came for a visit to the facility on June 6.

"The night he came to visit us, he made me cry, because he was so nice," Vittiglio said.

Paradela-Cattaneo traveled to the United States from the Philippines with her son David in 2004.

After settling in Boston, Alpha met Maurizio Cattaneo. She soon married the father of two boys, and they became a family of five.

Now, the family uses a multilingual approach to keep lines of communication open between the guests and the staff. Alpha speaks Filipino and English. Her son David, who works as a unit service associate at Mass. General and studies at Boston University, speaks English and some Italian he picked up from his stepfather. Maurizio's boys Francoise and Christian speak French.

The Cattaneo family lives at the facility, and sometimes they invite guests to dinner as a way to develop a closer rapport with the families.

Alpha said she wants to stay faithful to the motto of Casa Monte Cassino of providing a "home away from home."

She said before the former convent became available, the Vittiglios and other families in the North End brought guests to stay in their own homes during their treatments.

"We recognize the difficulty that families experience when a child is sick, and Casa Monte Cassino is not simply a roof over their head, or a place where they can stay while they are receiving treatment. We want to participate in the process of healing. Part of that healing is the welcoming and the love that people share in recognizing the need of the other," she said.

She said her background also plays a role in how she treats her responsibility at the house.

"I grew up on an island where everybody is family," she said.

Alpha said as boats arrived, her grandfather would ask even strangers if they had eaten and invite them in for breakfast.

"There was always something cooking in our kitchen," she said.

On a day-to-day level, running Casa -- as the guests and staff call it -- requires making arrangements to help guests get to and from medical facilities and keep appointments. But, beyond that, it also requires a human touch.

Sometimes that touch has to reach people like a girl from the Bahamas, Tia Ferguson, currently staying at Casa and going to Shriners Hospital for treatment of acid burns on her face.

Ferguson told The Pilot, Aug. 12 that when she first arrived, the family welcomed her and opened their home to her right away.

"The young boy helped me with my bags, and it was great," Ferguson said.

Much of the work Alpha and her family do for the guests include introducing people to the city itself. Some of the residents stay for extended periods of time, or their treatments require multiple return visits.

David Paradela said he enjoys helping people at Casa and connecting with them through his language skills, but he said sometimes the connection a person requires is more personal, and simple in a way, like someone to watch television with -- as he and young lady from the Bahamas do at times.

"Even though we don't really get into very personal things, because sometimes those things are hard to talk about, it's just a good experience being able to just have a friendship with someone because they are the people that are placed in front of you," he said.