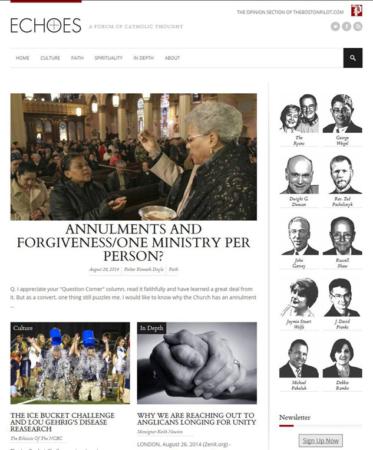 BRAINTREE -- This week, The Pilot launched a preview of a new online portal to present varied takes on current issues and events from a Catholic perspective.

The new portal, called Echoes, puts all of The Pilot's opinion, analysis and editorial content in one place, providing content beyond what is available in the printed edition, at Echoes.TheBostonPilot.com.

"In this moment in time, in which Catholicism is getting more attention in the news thanks to the new impetus for dialog with society at large brought about by Pope Francis, Echoes seeks to bring to that conversation the best voices of Catholic thought that will deliver vibrant views from the perspective of Scripture and Catholic tradition," said Pilot editor Antonio M. Enrique.

Pilot managing editor Gregory L. Tracy explained that Echoes is not a new website, but the next stage in the redesign and expansion of TheBostonPilot.com, which was completely revamped and optimized for mobile devices in March.

"Up until now, we have been mainly concentrating on enhancing our online presentation of news, photos and multimedia -- basically, the 'what' of the news. With the launch of Echoes, we are turning our attention to expanding and better presenting our coverage of the 'why' behind the events," Tracy said.

He added that, for now, the editors are calling Echoes portal a "preview," because the project is still ongoing.

"We plan to expand the content, add features and more fully integrate Echoes into the larger website," Tracy said.

According to a message from the editors on the Echoes webpage, the new section will reflect the authentic, traditional, and Scripture-based nature of Catholic thought in a way that authentically echoes the ideas developed in the Church over time.

The editors hope to challenge the notion that the Catholic perspective is outdated or unnecessary -- even as modern ideas reject tradition.

"I think there is the need for a place where the voices of catholic columnists can be gathered in one single portal where readers can find a variety of views on a variety of topics always with a catholic perspective. Echoes will strive to become that virtual place," Enrique said.

Though The Pilot is the Catholic newspaper of the Archdiocese of Boston, the new portal seeks to reach beyond the local scope to encourage dialog on a national and international scale.

"Echoes will include opinion pieces from local and national Catholic personalities on current events, faith and family life and spirituality. We have added an 'In Depth' section that will feature analysis and question-and-answer articles that will allow readers to explore the issues in greater detail," Enrique said.

With a stable of writers and columnists that includes national thought leaders such as Catholic University of America President John Garvey, the portal also gives readers access to local voices such as David Franks, a full-time faculty member of St. John Seminary in Brighton. A recently published article gave perspective on the suffering of Christians in Iraq from the former Mayor of Boston and previous ambassador to the Holy See Raymond L. Flynn.

The editors said they also hope that the portal will serve the larger Christian community as it provides the Catholic perspective with balance between faith and reason.

"Catholic thought expounds on the beauty of Christianity and makes it accessible through reasoned arguments that can reach all people of good will," Enrique said.