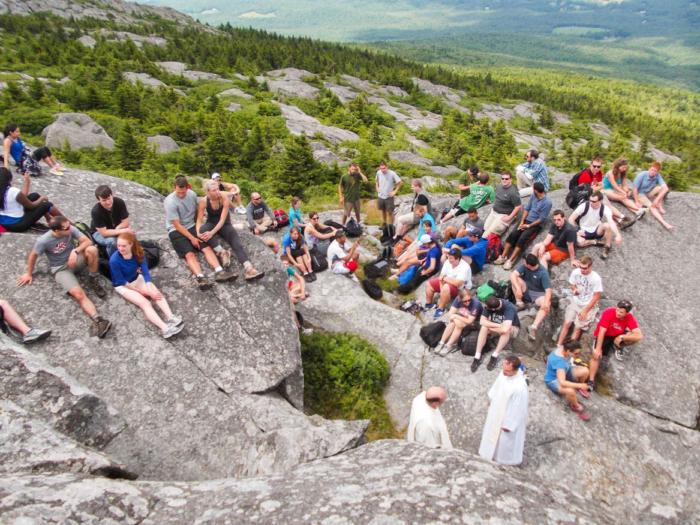 A group of young adults gather at the summit Mount Monadnock in Jaffrey, N.H. for a Mass July 12 following a hike up the mountain sponsored the Archdiocese of Boston's Vocation Office and the Office of Faith Formation of Youth and Young Adults. Pilot photo/courtesy Bryan Carnahan

JAFFREY, N.H. -- For a group of young Catholics who hiked up Mount Monadnock in Jaffrey, N.H., July 12, the trek presented more than an opportunity to enjoy nature, but an opportunity to experience the realities of their faith in beauty created by God.

The Vocation Office and the Office of Faith Formation of Youth and Young Adults of the Archdiocese of Boston hosted the event and Father Michael Harrington celebrated the Mass at 3,166 feet above sea level.

Father Harrington said the hike was "in the spirit of Pope John Paul II. He used to take young people up on camping and mountain trips where he would celebrate Mass for them in nature, we thought that it would be nice, a little different, for the young people to experience a Mass on a mountain."

"The same God who created the heavens and the Earth, came to us as a man and left to us His own Body and Blood," he added.

The hike began in the morning as hikers ages 18 and older arrived at the foot of the mountain. Before setting off, the group took a photo together and received a blessing.

Vocations director Father Daniel Hennessey, said participants in the hike came from well beyond the archdiocese.

"The hike was great especially because there were so many young adults from different parts of the archdiocese. We also had some people from New Hampshire and Rhode Island come," Father Hennessey said.

Father Hennessey led the hike from the front as things began, and Father Harrington followed up to prevent stragglers from falling behind.

Some of the young adults took the first hike of their lives, but more seasoned trekkers brought equipment that showed their experience.

Bryan Carnahan, 38, a resident of Salem, N.H. and a parishioner at St. Monica in Methuen, walked with hiking poles he said didn't actually speed his pace, but added stability that made it easier to keep his pace consistent.

"I do feel more comfortable going pretty fast with them, because if I go fast without them you're putting a lot of stress on your feet," he said.

Carnahan brought plenty of experience to the mountain that day. He hiked for years as a young person and remembered hiking with his parents at a young age -- specifically being young and small enough, when he began hiking, that logs fallen across the trail presented a difficult obstacle to traverse.

"We were little kids, and those logs were as tall as we were, or at least they were as wide as we were tall, so getting over them was a bit of a challenge. We found a way, and sometimes our parents would hold our hands and help us over them," he said.

As a college student he stayed with hiking, but remained disconnected from any kind of faith. Raised an atheist, he found a profound loneliness inside that didn't come from being alone. Having spent years "peak bagging" he had plenty of experience spending time alone -- especially on long hikes. To alleviate the feeling of loneliness, he reached back into memories of time spent going to Mass with his grandmother.

"I do remember being to Mass a few times as a kid, so I thought maybe I would check it out," Carnahan said of his return to the Church.

On the day of the hike, as the group neared the summit of the mountain, one of the priests asked people to scout ahead and find a suitable spot to celebrate the Mass. Carnahan volunteered.

He said the Mass presented a view that actually made him say "Wow" like nothing else that day.

"You don't always get to see something like that on a mountaintop, someone actually consecrating the bread and the wine," he said.

On the way back down the mountain, he stopped at a mountain brook and used a water filtration device he brought along to get some water. He said he noticed other hikers asking for water before he stopped so he shared what he had filtered with passersby, and refilled a few bottles.

Irene Mburu, 38, of Sacred Heart Parish in Quincy went on her first hike that day. She said the opportunity to participate in the Mass at the summit of the mountain brought her a sense of wonder.

"It felt very special. To be there and to have Mass, it was very, very special to me," she said.

Mburu, a nursing student from Kenya, said the experience tired her but became worth it as the day went on.

"It's good to be with friends and to go hiking for the first time," she said.

Another group never made it to the top of the mountain, became separated from the rest of the group, and missed the Mass. Father Carlos Suarez, of the vocations office for Hispanic ministries, stayed with that group throughout the day.

"One of the things that the Church teaches us is that there is a benefit when you can't receive communion. If you offer up that desire, God honors that desire and he fills us spiritually with his graces," Father Suarez said.

He said the communion the group experienced still brought with it a kind of closeness to God, even if the group did not make it to the Mass. Instead, the group ate lunch on a bluff within view of the summit, before heading along some less-traveled foot paths to rejoin the main group on their way down the mountain.

"We kind of take the comforts of life for granted, so it's good from time-to-time to step out of our comfort zone and to challenge ourselves really, because when we push our limits we recognize that we have to depend on something greater, on someone greater, than ourselves, if we are to overcome the difficulties we face. It's also a good reminder that we're not alone. I think in particular today's experience, the fact that a group of us hung together was significant, reminding us of that communion as well," he said.