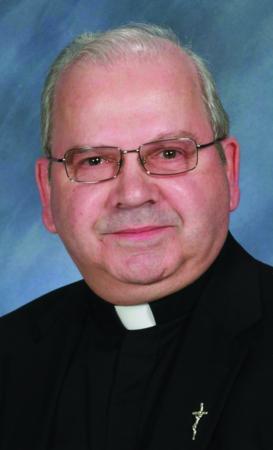 Bishop Arthur Kennedy was the principal celebrant of the Funeral Mass of Msgr. Stanislaw Kempa at Holy Trinity Polish Church in Lowell on June 21. The Tarnow, Poland native died in Lowell on June 17 at the age of 66.

A son of the late Mieczyslaw and Teresa (Ciesla) Kempa, he was born in Tarnow on May 1, 1948. He attended local schools and seminaries in his native diocese and Bishop Jerzy Ablewicz ordained him to the priesthood in the Cathedral Basilica of the Nativity of the Blessed Virgin Mary, Tarnow on May 27, 1973.

Between ordination in 1973 and his arrival in the archdiocese in 1991, Father Kempa served in several parish assignments of the Tarnow diocese. He arrived in the archdiocese and went to Lowell and stayed in that same parish until his death. He served there as parochial vicar (1991-1997); then as administrator (1997-2003) and finally as pastor from Nov. 14, 2003, the date of his incardination into the archdiocese of Boston, until he was named as Technical Assistant in residence at Holy Trinity Rectory, Lowell on June 3, 2014.

In August 2011, Father Kempa became a naturalized citizen of the United States of America. On Aug. 5, 2003, Pope St. John Paul II named him a member of the papal household as a Chaplain of His Holiness with the title of Rev. Msgr., while he was still a priest of the Tarnow diocese.

In his more than 23 years of service to the archdiocese and specifically to the Polish community at Holy Trinity parish in Lowell, Msgr. Kempa was greatly loved. He served also as the Chaplain of the Lowell Council #72 Knights of Columbus, one of the oldest councils in the worldwide fraternal organization.