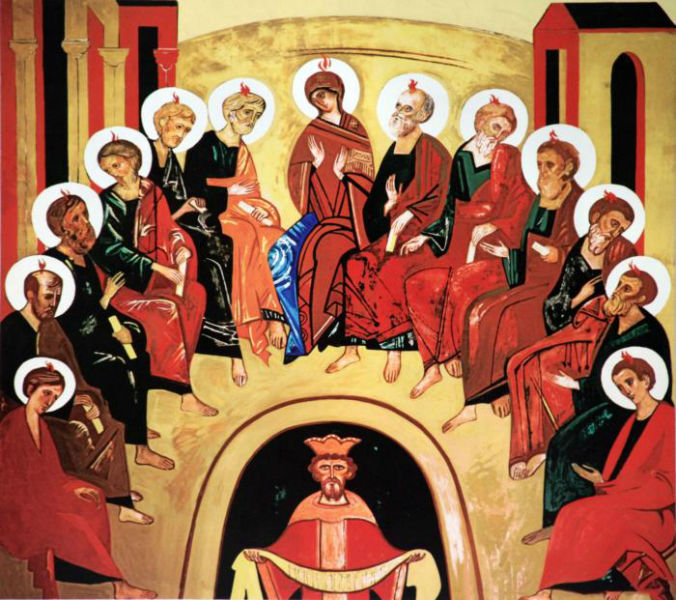 A scene from Pentecost is depicted in artwork at Our Lady of Divine Providence Church in Providenciales, Turks and Caicos Islands. (CNS photo/Gregory A. Shemitz)

A familiar enough text, right? But then Augustine, as is his wont, gives it a striking twist: "For just as he remained with us even after his Ascension, so we, too, are already in heaven with him, even though what is promised us has not yet been fulfilled in our bodies….While in heaven he is also with us; and we while on earth are with him. He is here with us by his divinity, his power and his love. We cannot be in heaven, as he is on earth, by divinity; but in him, we can be there by love."

There are something on the order of 70 million Catholics in the United States. How many of us think of ourselves as being "already in heaven" with the Lord? And if we really believed that -- if we really believed that the most important part of our being was united to Christ and thus incorporated into the life of the Holy Trinity -- how would we comport ourselves here on earth?

We'd be on fire with a sense of mission.

There are many reasons to deplore the change in liturgical nomenclature for the weeks after the Easter Season, from Sundays "after Pentecost" to Sundays "in Ordinary Time." As has been noted previously in this space (perhaps to the point of reader-tedium!), there is nothing "ordinary" about time after the Resurrection and Ascension. For, as that Colossians text suggests and Augustine makes explicit, human "time" has now been drawn into the divine life through the mystery of Christ's return to the Father and his being seated "at the right hand of the Majesty on high" (Hebrews 1:3) as Lord of history. History, in that sense, is "inside" the Godhead.

And there is nothing ordinary about that.

Sundays "after Pentecost," by contrast, reminded the Church that the first outpouring of the Holy Spirit, celebrated on the 50th day after Easter, continues in the Church throughout history, so that the Church can continually bear witness to "that which was from the beginning, which we have heard, which we have seen with our eyes, which we have looked upon and touched with our hands" (1 John 1.1) -- the Risen Lord, who offers us, in our friendship with him, a participation here-and-now in the life of God himself.

The Pentecost Season (if you'll permit a lapse into a relevant bit of liturgical antiquarianism) lasts from Pentecost itself through midday of the Saturday before the First Sunday of Advent. It is the longest of the Church's seasons; it is the season of hope (hence the green vestments); it is a season for lengthening the stride of the spiritual life, in a steady rhythm of pilgrimage toward the Kingdom where our hearts already rest because they rest in the Lord. But it is also, and above all, the season of mission. Because Pentecost is not simply about celebrating the gift of the Spirit to the Church; as the second chapter of the Acts of the Apostles illustrates, Pentecost is about giving that gift away.

The Pentecost Season is when those who truly believe that "we are already in heaven with him" offer others the possibility of living like that. The offer is made in many ways: in acts of compassion and charity; in acts of explicit witness to Christ; in explaining why the Church believes what it does. If, as St. John Paul II and Pope Francis propose, the quality of our discipleship is measured by our commitment to giving others the gift we have been given, the lengthy weeks of the Pentecost Season are divinely ordered to that gift-giving.

About which, there is nothing "ordinary."

George Weigel is Distinguished Senior Fellow of the Ethics and Public Policy Center in Washington, D.C.

- George Weigel is Distinguished Senior Fellow of the Ethics and Public Policy Center in Washington, D.C.