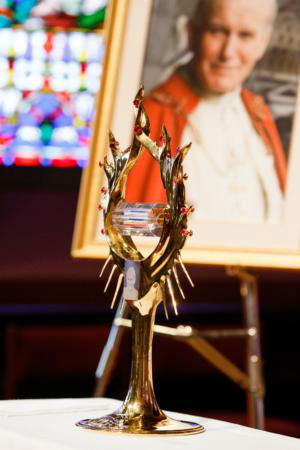 Hundreds of Catholic faithful came to venerate the relic of Pope St. John Paul II at the Cathedral of the Holy Cross June 22, 2014. The relic was at the cathedral June 21 and 22 as the first stop on a national tour being sponsored by St. John Paul II National Shrine in Washington, D.C. and the Knights of Columbus. (Pilot photo by Gregory L. Tracy)

Last weekend a vial of St. John Paul II's blood was brought to Boston's Holy Cross Cathedral and exposed to the public in a reliquary on Saturday, June 21 and Sunday, June 22. There was an honor guard from the Knights of Columbus, to whom the relic was given by the pope's longtime personal secretary, Cardinal Stanislaw Dziwisz of Krakow, in 2011 to foster devotion at the Knight's St. John Paul II National Shrine in Washington, D.C., just across the street from the Basilica of the National Shrine of the Immaculate Conception, our country's patroness.

Any body part of a saint or blessed qualifies as a first-class relic: "the body, head, arm, forearm, heart, tongue, hand, leg or other part of the body that suffered in a martyr, provided it is intact and is not little," in the words of the 1917 Code of Canon Law. Second-class relics are clothing or items owned by the saint or blessed, and third-class relics are things that have touched the other relics. Not surprisingly, attendants at the Cathedral were taking holy cards and rosaries and medals from the faithful to place them against the ampoule of the saint's blood, "which remains in a liquid state," according to the card from the St. John Paul II National Shrine.

Relics, like sacred icons and images, are a consequence of the Incarnation, the belief that God, in the person of Jesus Christ, took on human flesh and became man. So it is that the Second Council of Nicaea in 787, which had defended icons and sacred images against the iconoclasts, said that honor is not given to the inanimate object, but to the holy person represented, and thus to God, the source of all holiness.

While the living soul has separated from the body of the dead, Christians believe in the resurrection of the body and the reuniting of soul and body in the world to come. Grace can act through physical and material objects, as in the sacraments, which like the Church, are an extension of the Incarnation in space and time. The Council of Trent in 1563 declared that "the sacred bodies of holy martyrs and of the other saints…are to be venerated by the faithful, for through them many benefits are granted to men by God."

In the Old Testament, a dead man thrown against the prophet Elisha's corpse came back to life and stood up on his feet. (2 Kings 13:20-21). In the New Testament, Paul's handkerchiefs had healing power. (Acts 19:11-12). Similarly, even St. Peter's shadow had a healing effect. (Acts 5:15). When St. Polycarp was martyred in the second century, the early Christians took great care of his relics.

The story is told of two churches in Rome that purported to have two separate skulls, one smaller than the other, of St. John the Baptist, who had been beheaded. The credulous were told that the smaller skull was the head of John the Baptist as a young man. The Italians have a wonderful saying, "Si non e vero, e ben trovato," which means, "If it isn't true, it's a good story." Of course, the history of relics is beset with frauds and huckstering, which is why the Code of Canon Law absolutely forbids the selling of relics (canon 1190), and the Council of Trent decreed that "in the invocation of saints, the veneration of relics and the sacred use of images, all superstition should be removed and all filthy lucre eliminated."

I went to venerate St. John Paul II's relics with a friend of mine and two of his children. My friend told me that he and his wife were already relics, as they had personally met Pope John Paul II (I guess that makes me a relic, too.) I brought along a couple of St. John Paul medals I had gotten at his canonization last April in Rome, which had been blessed by Pope Francis, and asked the attendant to place them against the relic. When I gave the medals to the two children, my friend's daughter suggested that maybe she could swallow the medal and thus become a permanent relic. I told her that might not work, as it could come out the other end. Of course, the best way to become a relic is by becoming a saint oneself. After all, that's how the saints did it.

Dwight G. Duncan is professor at UMass School of Law Dartmouth. He holds degrees in both civil and canon law.

- Dwight G. Duncan is professor at UMass School of Law Dartmouth. He holds degrees in both civil and canon law.