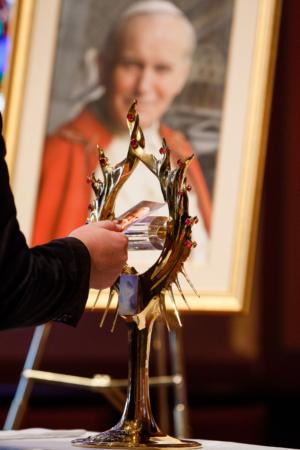 A member of the Knights of Columbus touches a holy card to the relic Pope St. John Paul II on display in the chapel of the Cathedral of the Holy Cross June 22.

SOUTH END -- Hundreds of Catholic faithful came to venerate the relic of Pope St. John Paul II at the Cathedral of the Holy Cross June 21 and 22 as the first stop on a national tour being sponsored by St. John Paul II National Shrine in Washington, D.C. and the Knights of Columbus.

Boston was the first city in the United States in which St. John Paul II celebrated Mass as pope, when he visited in October 1979 with 400,000 people gathering for his Mass on Boston Common. He was declared a saint on April 27 of this year.

During its time in Boston, the relic was available for public veneration Saturday afternoon and again on Sunday following the 11:30 a.m. Mass celebrated by Cardinal Sean P. O'Malley, during which he honored couples celebrating their 25th and 50th wedding anniversaries.

During the Mass, the golden reliquary and a portrait of Pope St. John Paul II were displayed next to the main altar of the cathedral.

In his homily, the cardinal thanked the Knights of Columbus for their support of the tour and spoke of the significance of the relic's presence in Boston.

"We are very, very privileged to have here in our cathedral these wonderful relics that have been lent to us by the Knights of Columbus from their shrine of St. John Paul II in Washington D.C. From the first days of Christianity, we have always had a special devotion to the relics of our saints," Cardinal O'Malley said.

"The first Masses in Rome were always celebrated on the tombs of the martyrs and from that custom, we have put relics of martyrs into our altars but today we are very blessed to have the relics of a saint who actually visited this cathedral during his lifetime and who so many people were able to see in person. We pray through his intercession for God's blessing upon our Church, our families, our whole community," he added.

The relic is similar to the one displayed at the canonization of Pope John Paul in Rome. It consists of a vial of his blood that was entrusted to the Knights of Columbus by his longtime personal secretary Cardinal Stanislaw Dziwisz, archbishop of Krakow.

Following the Mass, the relic was brought in procession to altar of the side chapel the cathedral, where the faithful lined up for an opportunity to venerate it, while members of the Knights of Columbus stood watch as honor guards. Other attendants from the Knights would take objects from the faithful such as saints medals, crosses or holy cards and touch them to the relic, making it a relic itself.

The relic will also make visits to several other cities in the United States, including St. Patrick's Cathedral in New York July 12-13 and then Philadelphia.

The nationwide tour will highlight the close connection St. John Paul had to the United States, as a frequent pilgrim to this country while he was pope. It will also provide the faithful who were unable to attend the canonization ceremony in Rome an opportunity to pay their respects to this great man.

"St. John Paul spent more time in the United States than any other pope before or since, shaping an entire generation of Catholics here and throughout the world," said Supreme Knight Carl Anderson. "Bringing his relic to communities throughout this country will recall for many Catholics his saintly life, his unswerving commitment to the dignity of every human person, and his emphasis on the call to holiness for each one of us."

More information about the relic and the tour is available at www.jp2shrine.org