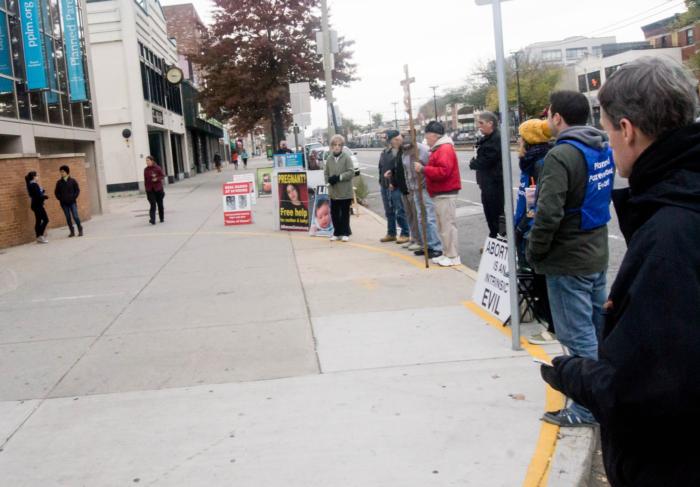 In the buffer zone case, the court held unanimously by a vote of 9-0 that the Massachusetts law violated the First Amendment, because the "buffer zones burden substantially more speech than necessary" to maintain the state's interest in maintaining public safety near abortion clinics -- on public sidewalks in some cases.

Cardinal Seán P. O'Malley, chairman of the U.S. bishops' Committee on Pro-Life Activities, called the overturned law discriminatory in a statement released shortly after the ruling.

"Today the Supreme Court found unconstitutional a Massachusetts law imposing criminal penalties on pro-life Americans who peacefully pray for and offer alternatives to pregnant women approaching abortion clinics. This discriminatory law barred these citizens from gathering on nearby public sidewalks, while exempting 'clinic escorts' trained to expedite women into the facility. Clearly this was an attack on pro-life Americans' freedom of speech, and we welcome the Court's decision to overturn the law," the cardinal said.

"This now overturned legislation reflects an ominous trend in our society. Abortion supporters, having long denied that unborn children have a right to life, would deny that their fellow Americans who seek to protect the unborn have the same rights as other Americans -- the right to freedom of speech and freedom of association; the right to participate in the public square and serve the vulnerable in accord with our moral convictions. Increasingly we see this trend evidenced at various levels of government. We are encouraged and pleased to know that with regard to this particular issue, our highest court has affirmed the American tradition of basic constitutional rights for all," Cardinal O'Malley said.

Father Eric Cadin, parochial vicar at St. Michael Parish in North Andover, was a plaintiff in the case with six other petitioners -- including Eleanor McCullen a grandmother who sued to challenge the buffer-zone law.

"It's exciting and encouraging as a priest, that an opportunity to bring counsel, to bring hope, to bring love to these women who need help -- and hope, help, and love to these people -- is still able to happen in an effective way. As an American it is exciting that our rights under the First Amendment, speech, are not restricted like they were," Father Cadin said.

The law, enacted in 2007, criminalized pro-life speech within 35 feet of an entrance, exit or driveway of an abortion clinic. It prevents people from approaching women contemplating abortion in order to provide them with support, information and practical assistance -- even in peaceful and quiet circumstances.

The court heard oral arguments in the case Jan. 15, which focused on the tension between the protected First Amendment right to speech on a public sidewalk and access to abortion facilities. During oral arguments Justice Antonin Scalia objected to people who want to speak with those entering an abortion clinic being called protesters.

Lower courts previously found that people expressing pro-life views had ample alternative avenues of communication with those headed into an abortion clinic, beyond coming within the 35-foot buffer zone, even suggesting that they could use a bullhorn.

"Regardless of anything, the whole point of being out there is not protesting, it's really desiring to bring hope, help and love to these women," Father Cadin said. "It's more than a talking point, that's really why most people are doing this," he said.

Later that day Massachusetts Citizens for Life issued a statement.

"This is a victory for all citizens who value their First Amendment rights and for clinic-bound women who might need someone to talk to," President of MCFL Anne Fox said.

The lawyer who represented McCullen in the case also commented according to the statement from MCFL.

"Americans have the freedom to talk to whomever they please on public sidewalks. That includes peaceful pro-lifers like Eleanor McCullen, who just wants to offer information and help to women who would like it. The Supreme Court has affirmed a critical freedom that has been an essential part of American life since the nation's founding," said Mark Rienzi.