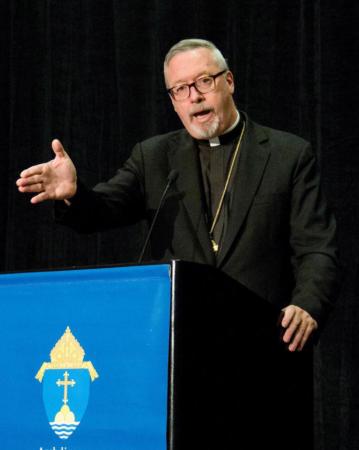 WALTHAM -- Indianapolis auxiliary Bishop Christopher J. Coyne spoke to nearly 200 priests of the Archdiocese of Boston at their annual convocation about the challenges and changes facing the priesthood as the wider Church changes. The gathering was held at the Westin in Waltham, May 21.

A Boston priest until being named auxiliary bishop of the Archdiocese of Indianapolis in 2011, Bishop Coyne spoke as a brother priest who once served as a professor and director of the pre-theology program at St. John's Seminary in Brighton.

Bishop Coyne said the Church no longer stands at the heart of a Judeo-Christian culture, but on the periphery of a secular-relativistic culture.

He called the new societal environment "mission territory," and encouraged unity within the priesthood as the Church reaches out through the new evangelization to a changing body of the faithful.

Bishop Coyne said the people served by priests have moved with time from being composed of mainly people of European descent living in the northern U.S., to being more Latino and living in the South and the West.

"The prayer of our Church is more and more one with a Spanish accent," Bishop Coyne said.

Despite the changes, he outlined the structure of a diverse priesthood in the Church, ready to meet challenges like the new evangelization, and on an archdiocesan level the new pastoral plan Disciples in Mission. He pointed to a diverse set of viewpoints in the presbyterate, as the priesthood changes and new generations join their ranks.

"Brothers, can we respect our mutual priesthood while acknowledging our differences? Can we honor the priesthood of each of us?" he asked.

He explained that older men contrast with younger men in their view of the Church, while priests from different ethnic communities can bring an entirely different perspective.

He said in counseling younger priests concerned about the behavior of older priests, he reminds the young men that they should honor their elders' priesthood and all that it stands for.

"These are the men who have stayed as priests when many of their brother priests did not. For example from 1965 to 1975, 80,000 priests worldwide left the priesthood. These men have been here for the people of God through all these years, celebrating the Mass, performing thousands of baptisms and funerals, burying the dead, caring for the sick, teaching and preaching. They stayed," he said.

"To the older brothers who are complaining about the new conservative priests, my encouragement is the same." Bishop Coyne said. "These are the men who came when the Church in the United States was in its darkest hour. When many of their generation were moving in a whole different direction, when many did not understand or agree with what they were doing and how they could commit themselves to the Catholic Church in such a way, they have come."

He said foreign born priests must be welcomed by their brother priests.

"As regards to international priests of the archdiocese, I would encourage all of us who are not FBI -- foreign-born internationals -- to respect their different cultures and to strive to get to know who they are and from where they come," Bishop Coyne said.

He used Cardinal O'Malley's oft-repeated set of three pillars needed to live a healthy priesthood -- a rule of life, a priest support group, and a yearly retreat.

He also pointed to a maintained centrality of Christ in one's life as a source of strength for priests.

"What's going to draw people to the Church is to know we love Christ, and we love Christ in the Church and in each other. It's to see someone who has the fervor and the fire of Christ, and not just kind of bureaucrats of Christ sometimes that we can find ourselves coming into," Bishop Coyne said.

He asked, if priests are "in persona Christi" at times of worship, should they not seek to know Christ more and more each day.

Cardinal Seán P. O'Malley thanked Bishop Coyne and followed up with remarks after the keynote.

"We are sent to show the world the merciful face of the Father in Jesus Christ. The priestly identity is an icon of the good shepherd, but the identity depends on the relationship with the good shepherd and with the flock," the cardinal said.

He encouraged unity between the priests and with the archdiocese, using an analogy from Pope Francis.

"The Church is a field hospital, but if you are wounded and you are crawling away from the hospital, you might be crawling over landmines and through barbwire fences, and these are self-inflicted wounds. So, my appeal to all of our priests is to take care of yourselves and to allow us to help take care of you," he said.