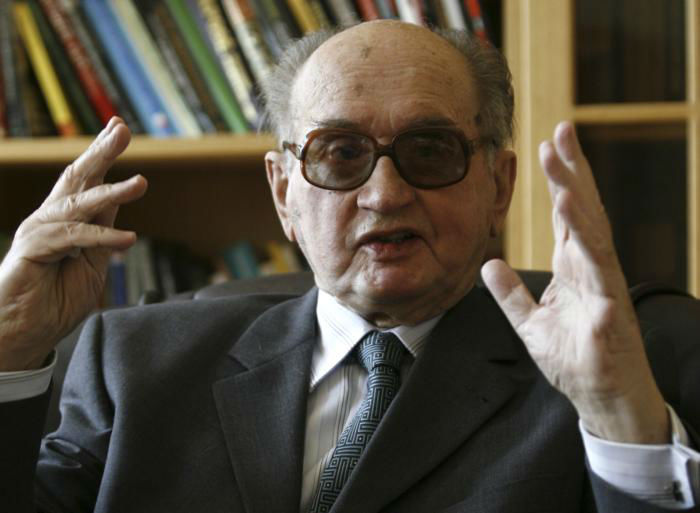 Gen. Wojciech Jaruzelski, Poland's last communist leader who imposed martial law to crush the Solidarity movement only to hand over power less than a decade later, died at age 90 May 25 at a military hospital, where he was being treated after a stroke. He is pictured in a 2008 photo. (CNS photo/Kacper Pempel, Reuters)

WARSAW, Poland (CNS) -- Retired Gen. Wojciech Jaruzelski, Poland's former military ruler who crushed the Solidarity movement with martial law in 1981 but also presided over the peaceful ending of communist rule in 1989, died May 25 in Warsaw. He was 90.

Archbishop Wojciech Polak, newly named archbishop of Gniezno, told the Catholic information agency KAI he believed no one should "pass judgment on a person's life."

"The prospect of eternal life can open up in life's final moments even for those who rejected it," the archbishop said. "The wounds he inflicted will remain. But we should also remember the only one who can grant forgiveness and healing is God."

Archbishop Jozef Michalik of Przemysl, who was president of the bishops' conference for a decade until March, said he had regularly prayed for Jaruzelski and would continue doing so, "irrespective of the state of his soul when he died and what he was in life."

"It's exceptionally difficult to evaluate this man," he said. "When a person crosses the threshold of eternity, we should remember only God knows the true state of his conscience. Sometimes an outward act, done unconsciously with bad results, can be seen differently by God."

Born in 1923 into a devout Catholic family, Jaruzelski attended a Marian order school in a Warsaw suburb, but was deported with his family to Siberia as a forced laborer by Soviet occupation forces in 1941.

Joining the ruling Communist Party, he enjoyed a meteoric military career, becoming Poland's youngest army general at 33 and chief of the general staff at 42. In 1970 he was defense minister when Polish troops massacred protesters in Poland's Baltic ports.

In 1981, when Poland was paralyzed by Solidarity strikes, he was appointed prime minister and Communist Party leader, ordering the internment of thousands after declaring martial law just weeks before Christmas.

In 1989, Jaruzelski agreed to talks with the Solidarity-led opposition and withdrew from political life in 1990 after a year as Polish president.

He was charged in 2006 with "committing a communist crime," but avoided a court sentence due to his poor health.

In a 1991 Catholic News Service interview, the praised the "great work" of the Catholic Church in teaching "noble and beautiful ideals" and preserving Poland's national identity.

He also paid tribute to the "patriotism and moral stature" of then-Pope John Paul II, with whom he was in conflict throughout the 1980s, and said Marxism and Christianity had "much in common" in their social and moral outlooks.

In a May 25 commentary, the KAI agency said the general, who was diagnosed with lymphoma in March 2011, had never taken part in religious services, even staying outside the church during his mother's Catholic funeral.

However, it said he had "close contacts with the church" as communist ruler and made key concessions to it, despite the "hysterical anti-church campaign" waged by his regime's spokesman, Jerzy Urban.

The agency recalled that Jaruzelski had been rebuffed in his attempts to open diplomatic ties with the Vatican until democratic reforms in 1989, but said he had received Holy Communion before his death.