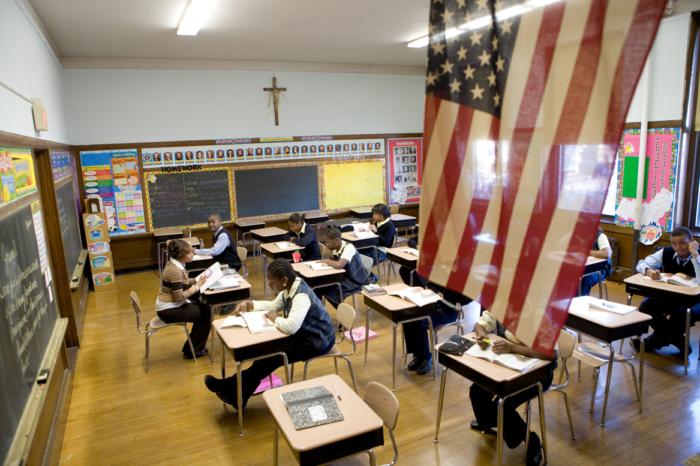 The Supreme Judicial Court ruled May 9, students reciting the Pledge of Allegiance containing the words "under God" does not discriminate against atheists and other non-believers. Pilot file photo/Gregory L. Tracy

BRAINTREE -- Cardinal Seán P. O'Malley expressed support for a decision by Massachusetts Supreme Judicial Court, May 9, to allow the phrase "under God" in the Pledge of Allegiance.

"We were very pleased to learn today that the Supreme Judicial Court has upheld the traditional wording for the Pledge of Allegiance describing our country as 'one nation under God,'" Cardinal O'Malley said in his blog, cardinseansblog.org, May 9.

The case of Doe v. Acton-Boxborough Regional School District challenged a state law that requires daily school-sponsored and teacher-led classroom recitation of the Pledge of Allegiance. The court sided with the school district, and ruling the district could compel students to recite the Pledge of Allegiance including reference to God.

"There are many manifestations in our public life of the existence and the presence of God and it would be unjust to try to erase those. It is part of the tradition of our country and an expression of our religious freedom," the cardinal said.

David Niose, president of the Secular Coalition for America at the time he presented the case, served as attorney for the plaintiffs as the case was brought through the American Humanist Association's Appignani Humanist Legal Center.

Niose argued that the specific reference to God in the pledge discriminates against atheists and other nonbelievers.

"Atheist-humanist children love their country no less than do children who believe in God, and it's just wrong to have a daily patriotic exercise that invalidates them by associating patriotism with God-belief," Niose said after arguing the case. "If schools conduct a daily exercise to instill national loyalty, it should be inclusive and nondiscriminatory."

The Pledge of Allegiance was original composed by Baptist minister Francis Bellamy and published in an 1892 edition of the Boston-based magazine The Youth's Companion as part of the commemoration of 400th anniversary of Christopher Columbus's arrival in America.

The pledge, as Bellamy originally composed it, read: "I pledge allegiance to my flag and the Republic for which it stands, one Nation indivisible, with liberty and justice for all."

In 1923, the pledge was amended by the National Flag Conference to change "my flag" to "the flag of the United States" and in 1924 the words "of America" were also added.

Though it was regularly used by schoolchildren and groups throughout the country, it wasn't until 1942, the 50th anniversary of its publication, that it was officially adopted by Congress and became part of the U.S. Flag code.

In 1954, the Knights of Columbus played a major role in the addition of the words "under God" to the Pledge of Allegiance.

According to the U.S. Knights official account, they began including the words "under God" in the Pledge of Allegiance in 1951 after the organization's board of directors adopted a resolution mandating that the amended pledge be formally recited in each of its 750 Fourth Degree assemblies. A year later, the Supreme Council adopted a resolution that urged the official addition of "under God" to the pledge.

The new wording was passed by Congress and signed into to law by President Dwight D. Eisenhower 60 years ago next month, on June 14, 1954, Flag Day.