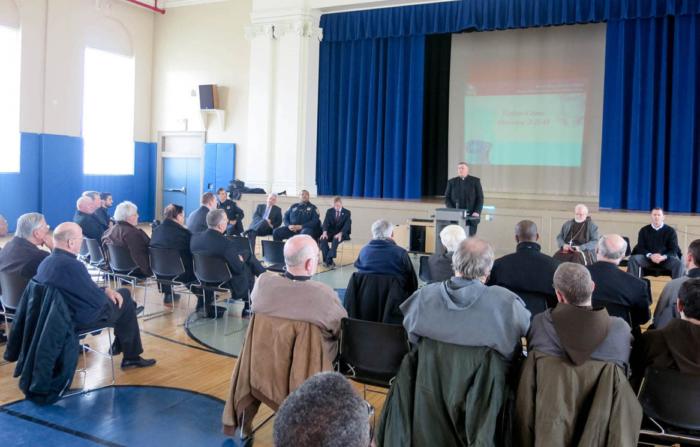 ROXBURY -- Cardinal Seán P. O'Malley and priests from throughout the neighborhoods of Boston met with top Boston Police Department leadership, Feb. 28, to discuss ways to collaborate against gun violence in the city.

The clergy and law enforcement officials met at a closed-to-press meeting at the Teen Center at St. Peter's in Dorchester.

Speaking to The Pilot following the meeting, Boston Police Commissioner William Evans said the police department asked the priests of the Archdiocese of Boston to support them in getting the message out that the flow of guns and violence into city streets must end.

"We asked for the archdiocese, the priests in the city, to help us in our message to stop the violence and to help us get guns off the street. It was great that Cardinal O'Malley came out and all the priests were there. This is a team effort. The police can't do it alone," Evans said.

He said he believes that the archdiocese can play a major role in reducing violence in the city by reaching out to young people and families. He said the archdiocese and its priests made a key difference in his life growing up.

"I'm hoping they can do the outreach to the community, like they did to me growing up," Commissioner Evans said.

Cardinal O'Malley said the Church, with resources like the Teen Center in Dorchester and Catholic Charities, stands ready to contribute to a resolution of gun violence issues in Boston.

"We are hoping to work together with the commissioner and the people on the police force to look for ways of helping to get these guns off the street and make the communities safer," Cardinal O'Malley said.

The cardinal and the commissioner had attended the wake of Jan Marcos Pena, a 9-year-old boy shot accidentally by his brother with an illegal gun, in Mattapan earlier in February.

Clergy, religious, and law enforcement officers -- including the police commissioner -- leaving the meeting said the discussion that took place inside the Fish Family Gymnasium at the teen center pointed a way forward to address the issue concretely.

"I think the death of Jan Marco Pena affected all of us. I mean, we see gun violence across the board, but the fact that a 9-year-old was shot and killed accidentally by his brother told all of us that we have to do something," he said.

Father Ahern said the meeting, went beyond just connecting law enforcement officials with clergy only from neighborhoods that regularly experience violence. He said those in attendance included Suffolk County District Attorney Daniel Conley, Dan Mulhern, one of Mayor Martin J. Walsh's frontline staff members on the issue, and over 40 priests from parishes throughout the neighborhoods of Boston.

"They basically said, 'You know, we need your help,' that the only way we are going to address the issue of gun violence is if we are one community -- the Church being a very central part of that community," Father Ahern said.

Father Ahern described the message the police commissioner delivered to the Boston priests -- a personal message rooted in the experience of Commissioner Evans as a young man who attended Gate of Heaven School in South Boston.

"The commissioner told us about his own experience -- about how important the Catholic Church was in his life, and that he could have gone the wrong direction, but the Church provided all the supports he needed, including an education. It made all the difference. So, he asked all the priests gathered that, if they see a kid going the wrong direction, to take them under their wing and offer them some of the services he needs," Father Ahern said.

Father Ahern said the commissioner asked the priests to publicize the gun buyback program that will begin at the end of March. St. Peter's Church in Dorchester will serve as a location for the buyback program.

He said the meeting also included about half an hour of discussion between clergy and law enforcement.

"It was a good give-and-take, saying that the Catholic Church is in every neighborhood. The priests are very involved, very present, and we need them to step up to the plate in a more significant way," Father Ahern said.

He said outreach before the meeting by the archdiocese brought priests in from neighborhoods that might not necessarily experience violence, but priests there can still make a difference.

Father Ahern said the cardinal outlined some of the work he did in his previous ministries involving gun violence, especially with regard to his work as a priest in Washington D.C.

He said the cardinal described his work in the inner-city there, coping with violence, taking an active role in gun buyback programs, and providing support to families impacted by gun violence.

"He was asking his own priests to do some of the same. It was the cardinal who gathered us. The priests responded very well. The police acknowledged all that the parishes are doing, but asked for a little bit more involvement on the issue of violence," Father Ahern said.

"They wanted to do their part to ensure that the archdiocese could come in and help the communities that needed it most, especially with the problems that have been plaguing the communities for years, and that is the senseless gun violence and all that that entails -- especially the death of many of our youths," he said.

The police chief said adding the voice and support of Catholic clergy, in solidarity as an archdiocese with the cardinal, to the presence of other churches that also work to address the issue of gun violence sends a clear message.

"I think that sends a clear-cut message to everyone -- including the predators that prey on our children and take advantage of them through gun violence, or getting them incorporated into that, or into gangs -- that this is a united front, a unified front, that's not going to tolerate that and that we're here to work together, all of us, all denominations, no matter where you hailed from, in what part of the city. We're here to work together," Gross said.

He said the mere presence of the cardinal on behalf of the archdiocese sent a message of solidarity.

"That's a huge message. That's a message that needs to be sent, that it is a united front," he said.