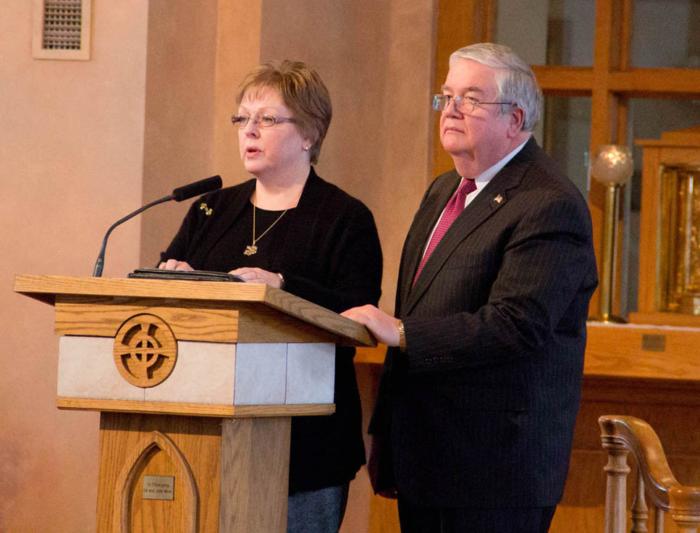 NORTH ANDOVER -- Cardinal Seán P. O'Malley took the message of the 2014 Catholic Appeal "Forward in Hope" to parishes throughout the Archdiocese of Boston on the weekend of March 1-2.

The message, inspired by Pope Francis's first encyclical "Lumen Fidei," was delivered in person by the cardinal as he celebrated Mass at St. Luke Parish in Belmont, March 1 and at St. Mary of the Assumption Parish in Lawrence and St. Michael Parish in North Andover, March 2. Other parishes in the archdiocese played a recorded version of the cardinal's homily during Masses that weekend.

At St. Michael in North Andover, the cardinal spoke about the need to come together to support the 50 ministries that serve the parishes of the archdiocese helped by the Catholic Appeal.

"Today's Catholic Appeal is to remind us that as Catholics we share in the communal mission. It's our collective responsibility to care for the poor -- as Pope Francis keeps reminding us -- to reach out those who are on the periphery. It's our responsibility to carry the Gospel message to the world and pass on the faith to new generations of disciples. To do this, we need to share our resources that have been entrusted to each of us, putting them at the service of God's people," Cardinal O'Malley said.

The Catholic Appeal is the primary fundraising effort supporting the work of the Church in the Archdiocese of Boston. Through the appeal, Catholics help sustain ministries serving 289 parishes in 144 cities and towns, 121 Catholic elementary and secondary schools, and thousands of Catholics of all ages in many life circumstances.

"We pray that God will bless each of you for your generosity that allows us to further the mission of the community of faith, so that together we may work to deepen a sense of solidarity and community among our fellow Catholics, and so that together we may work to repair a broken world, to feed the hungry, to bring God's loving mercy to all in pain and despair. We can only do this together," the cardinal said.

The pastor of St. Michael's, Father Kevin Deeley, thanked the cardinal for his presence and introduced two people who make the Catholic Appeal work in the parish.

"We are blessed in our parish to have Jim and Katherine Keith, who very generously have served as coordinators of this appeal," he said.

In the archdiocese, Catholic Appeal coordinators organize funding efforts on the ground level in parishes like St. Michael's.

James and Katherine Keith shared their knowledge of how the Catholic Appeal helps the parish directly with those gathered for the Mass.

"The appeal has helped many, many ministries right here at St. Michael's and throughout the archdiocese," Katherine Keith told the congregation.

In January a burst pipe flooded St. Michael's School across the street, and required funding for repair.

"Do you know that every day a parish is supported through this appeal? It became especially apparent, when within an hour of the flooding of the school this past January, the archdiocese had a cleanup team in place for us," she said.

"The appeal coordinators are vital for several reasons. The first is that they are a major support to the pastor in implementing the Catholic Appeal. They are peers. They are volunteers. They are donors. So when parishioners are considering their support of the ministries of the archdiocese through the appeal, there are people in the parish, who are peers that are already supporting it, that know about, that can answer questions about it," Doorley said.

Before the weekend of March 1, called Commitment Weekend, Doorley said more than 10,000 Catholics had already pledged in excess of $3 million.

"I think that everyone at the archdiocese in the Central Ministries is grateful to the pastors, to the parish staffs, to the appeal coordinators, to the donors, who are making the appeal such a success," she said.