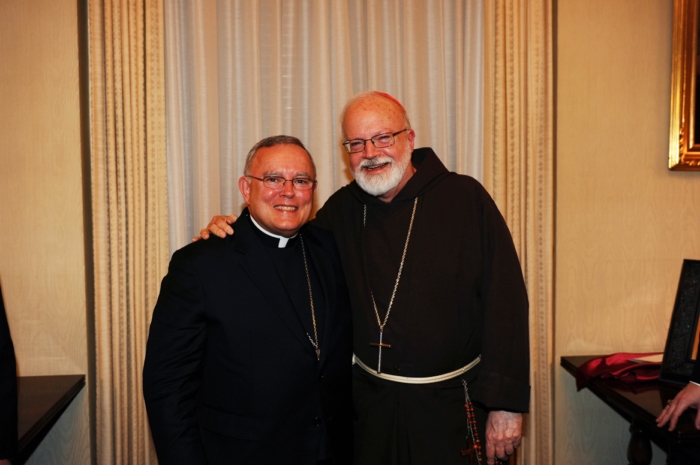 'That night, I departed for Washington for a gathering at the nunciature sponsored by Caritas in Veritate International... During the evening they honored Archbishop Charles Chaput and me with the organization's first annual Pope Francis Charity and Leadership Award.' Pilot photo/CardinalSeansBlog.org

...we went to the wake for Janmarcos Pena, the 9 year old Mattapan boy who was apparently accidentally shot and killed by his brother with a handgun. His funeral was held yesterday (2/12) at Our Lady of Lourdes Parish. It was a very moving moment and, sadly, underscored the problems that exist with gun violence in our communities. It is my hope that the Church will be able to do more to contribute to efforts to address the problem of gun violence in our neighborhoods. We have already begun to hold conversations with our priests and others about what steps we should take going forward.

Each February, the archdiocese sponsors two weekend-long retreats for men discerning a vocation to the priesthood. This year we had over 40 men on the retreats, looking to the possibility of entering either Blessed John XXIII National Seminary or St. John's Seminary. I joined the retreat at Blessed John Friday night (2/7), where we had a Mass and panel discussion with the attendees. Saturday (2/8), I joined the retreat for St. John's that was being held at the Connors Family Retreat Center in Dover, which is owned by Boston College and is used as a retreat house for students. As I always like to do, I gave a talk to the men, followed by several witness talks by priests and seminarians and panel discussions. These gatherings are a wonderful opportunity for men considering a vocation to have the opportunity to learn more about seminary life and about priestly vocations.

Sunday (2/9), I celebrated a Mass to mark Black History Month at St. Katharine Drexel Parish in Roxbury. It was also an occasion to celebrate the 20th anniversary of the local council of the Knights and Ladies of Peter Claver and they received an award from their national office as part of the Mass. The parish also is the home of the Nigerian community in the archdiocese. So, they had two choirs at the Mass, the Archdiocesan Black Catholic Choir and the Nigerian Choir. Following the Mass, there was a reception in the parish hall, but I was unable to stay. I explained to the people that I had to attend the Mass of Thanksgiving for Bishop Deeley, who was following the footsteps of Bishop James Augustine Healy, the first Black American bishop, who was also a Boston priest who went on to be the Bishop of Portland, Maine.

That night, I departed for Washington for a gathering at the nunciature sponsored by Caritas in Veritate International. Caritas in Veritate International represents a coalition of several organizations that are working in areas of development and relief. The keynote speech was given by Father Robert Spitzer S.J., the former president of Gonzaga University. He spoke about the two aspects of truth and charity and how, in the mission of the Church, they complement each other, particularly in the area of development and service to the poor. During the evening they honored Archbishop Charles Chaput and me with the organization's first annual Pope Francis Charity and Leadership Award.

The next morning (2/10), I was back in Boston where I attended the wake for Father Daniel Harrington, a very famous and prolific Scripture scholar. It was held at St. Ignatius Church and I was able to tender condolences to his brother and his brother's family who were there, as well as the Jesuit community. Father Brian Flatley was also there, and he told me that Father Harrington came to his parish every weekend for 30 years. I thought, what a wonderful thing it would be to have someone of that caliber be a presence in your parish! Father Harrington was the editor of New Testament Abstracts and was a man who was just an extraordinary scholar and teacher. He will be sorely missed.