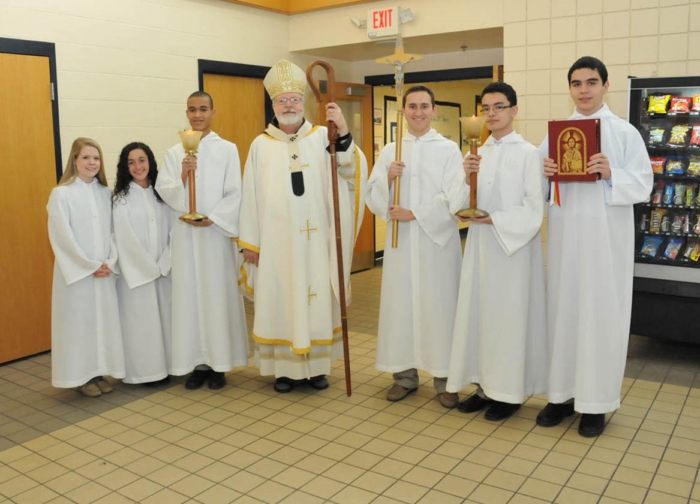 Friday (1/31), I travelled to Lowell Catholic High School to join in the celebration of their 25th anniversary as a new school that amalgamated the pre-existing Catholic high schools in Lowell. Pilot photo/CardinalSeansBlog.org

I was surprised to read the accounts of the report issued this week by U.N. Committee on the Rights of the Child, because I would have thought that the competency of this commission is to examine the policies and practices of their member nations, of which includes the Holy See. I think had they focused on that, they would have been able to make what I would consider a valuable contribution, because the Holy See needs to model policies for child protection for the rest of the dioceses in the world. Instead they extrapolated on the life of the Church, which is not their competency, and interjected many of their own ideological preferences. They also appear to have not taken into account the hard work that has been done in many parts of the world. It is very easy to get the headlines when you criticize the Church, however, I do not think the commission's report has been either fair or particularly helpful. On the other hand, I hope that out of this will come greater resolve by those in the Holy See to be more proactive on this issue and to cooperate with the new commission on child protection that the Holy Father is establishing, which is of such paramount importance for the life of the Church.

Friday (1/31), I travelled to Lowell Catholic High School to join in the celebration of their 25th anniversary as a new school that amalgamated the pre-existing Catholic high schools in Lowell. The school has made wonderful progress under the leadership of principal Maryellen DeMarco, who was recently named Educator of the Year at the Enterprise Celebration of Excellence Awards. The Mass was attended with great devotion and enthusiasm the students, some of whom had been with us at the March for life in Washington and in Brazil for World Youth Day. It was good to be with them again along with many of the parents and grandparents of the students. We were happy to be a part of their 25th anniversary celebration.

Saturday (2/1), we had a Mass and reception organized by our Office of Pastoral Support and Outreach for those who have been impacted by clergy sexual abuse. It is always an important moment to gather with survivors and their families to offer this Mass. I am so grateful to Vivian Soper and her staff for bringing this event together, carrying on the work that was done for so many years by Barbara Thorp. This annual gathering is a very important pastoral outreach to those who have been affected by clergy abuse and we are always gratified by the presence of so many people at the Mass. For many of them, it is an opportunity to reconnect with the Church after having stepped away.