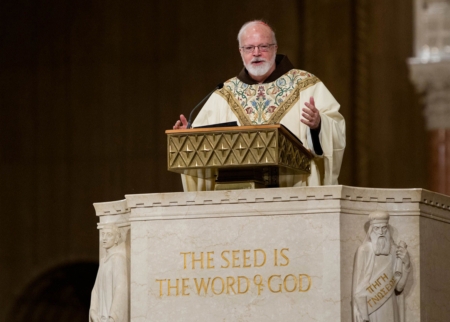 Cardinal Seán P. O'Malley delivers the homily during the opening Mass of the National Prayer Vigil for Life Jan. 21 at the Basilica of the National Shrine of the Immaculate Conception in Washington. The all-night vigil is held before the annual March for Life, which this year marked the 41st anniversary of the Supreme Court's Roe v. Wade decision that legalized abortion across the nation. Pilot photo/Gregory L. Tracy

The "vain and proud king" gullibly believed the swindlers who "told the king that those who could not see the ('magic') cloth were stupid and unfit for office," said Cardinal O'Malley, chairman of the U.S. bishops' Committee on Pro-Life Activities.

"The king was quite deceived and paraded through the street of his capital to receive the ovations of his people. The crowds lined the streets and applauded when the king passed by. The crowd shouted compliments and congratulated the king on his magnificent clothing. Suddenly a little child shouted, 'But he has nothing on at all,'" Cardinal O'Malley said.

"'The king's new clothes' today are called reproduction rights, termination of pregnancy, choice, and many other subterfuges that disguise the reality and the brutality that is abortion," he added. "The voice of the church is like the child who declares before the world that the new clothes are a lie, a humbug, a deception. The church with the candor of a child must call out the uncomfortable truth. Abortion is wrong. Thou shall not kill."

Cardinal O'Malley made his remarks in the homily of the Jan. 21 Mass opening the National Prayer Vigil for Life at the Basilica of the National Shrine of the Immaculate Conception.