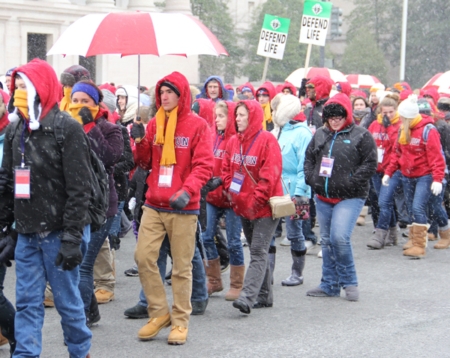 BRAINTREE -- This year the largest group of young people ever from the Archdiocese of Boston will join Cardinal Seán P. O'Malley at the March for Life in Washington, Jan. 22, on a pilgrimage to witness to the sacredness of human life.

Over 750 youth and young adults have registered with the Office for the New Evangelization of Youth and Young Adults (ONE) to travel to the 41st annual March for Life, which broke the record for attendance in the previous seven years of the pilgrimage run by ONE.

Father Matt Williams, director of ONE, said the numbers have steadily increased in recent years.

"Based on the attendance at the march, I would say that the young seem to be very much gettng more and more on board with the message of the Gospel of Life," Father Williams said.

The archdiocese sent over 500 students to the march last year, who joined an estimated crowd of 500,000 on the march from the National Mall up Constitution Avenue to the Supreme Court.

He said the increased attendance "is the result of more communities getting involved, which means that we have leaders of young people who have a love for young people, have a love for the Gospel of Life, and are willing to roll up their sleeves and advocate with the young people, to join them on this pilgrimage, and ultimately to join Cardinal Seán."

This year's March for Life is the first since the election of Pope Francis in 2013.

Media have called an outpouring of public support and engagement with the pope the "Francis Effect." Father Williams said the presence of the "Francis Effect" on the streets of the capital would be difficult to quantify before the march.

"What I think is kind of cool for the young people is many of them know that Cardinal Seán played a prominent role at the conclave, and so accompanying him at an event like this definitely helps them to appreciate ... the gift that we have in our cardinal archbishop, especially how he is so highly revered by the Holy Father and by the universal Church," Father Williams said.

Cardinal O'Malley, as the chairman of the U.S. Conference of Catholic Bishops Committee on Pro-Life Activities, is scheduled to be principal celebrant and homilist at the Vigil Mass for Life held at the Basilica of the National Shrine of the Immaculate Conception the night before the march, and interact with Boston pilgrims at other events during the trip.

The day of the march all pilgrims from the Archdiocese of Boston who attend the March for Life are invited to join Cardinal O'Malley at the Shrine of the Sacred Heart in Washington for a Mass. Between groups organized by the Pro-Life Office, Deacons for Life, archdiocesan parishes, Boston Catholic schools and others, organizers expect more than 1,000 Boston pilgrims to gather there.

The Boston pilgrims taking part in the Youth Pilgrimage for Life will travel to Washington in three groups: young adults, middle school age young people and high school students. Organizers call these the three "tracks" of the pilgrimage. Some groups leave for Washington as early as Monday, while a majority of pilgrims leave early in the morning on Tuesday, and some leave the Wednesday of the march. Young people arriving on Tuesday evening open their experience with an evening of prayer and song at the Patriot Center at George Mason University.

"Young adults are either in college or they work, and they are not really allotted a lot of time off, so this is a fast-track, express March for Life," she said.

Chris Carmody coordinates for St. Mary High School in Lynn leading students on the high school track. He said students are encouraged to experience the trip as a sacrifice on behalf of the unborn, as organizers ask that students forgo things like energy drinks and electronic devices while on the trip.

"We really talk a lot about what is sacrifice, and that's what makes it a pilgrimage, not just because we go to Mass while we're in D.C. It's the whole experience," Carmody said.

Stephen Colella will lead the middle school age group, who he said often have their parents come on the trip as well. He said the participation of families distinguishes this track from the other two.

"Because its middle school, parents are much more involved, so it becomes really a family track," Colella said.

Parents, parishioners and supporters can express solidarity with March for Life pilgrims at The Holy Hour for Life organized by the Deacons for Life and the Pro-Life Office, hosted in parishes in the archdiocese at various times the week of the march.

Deacon John Burkly, who started Deacons for Life in 2008, said the holy hours give Catholics at home an avenue to participate in the march even if they can't make it to Washington. "We are raising a very loud voice. We are storming heaven, as they say, with prayers within families, within parish families, and within the archdiocesan family all at the same time," Deacon Burkly said.

Those back in the archdiocese can also follow March for Life events online at PilotCatholicNews.com, BostonCatholicPhotos.com and CatholicTV.com.