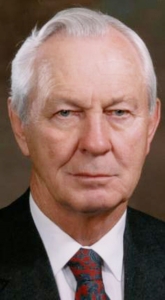 He really did not like the limelight, even less did he like praise and acknowledgement for any of his many good works. And as many of those good works that were public and well known, there are many more quieter and less known.

John J. "Jack" Shaughnessy died on Nov. 27 at South Shore Hospital in Weymouth. Born in Boston and raised in Quincy, he was an alumnus of Boston College High School (1944) and attended both Williams College and Tufts University.

After serving in the US Navy he came home and joined his late brother Al in their local but expanding crane, rigging and aerial lift business "Shaughnessy Crane Service." Over the years, the business grew and expanded.

Married to Mary (Lagace) Shaugnessy, they were the parents of seven children: Stephen, Cheshire, England; John and Michael, both of Hingham; James and Susan Harrison, both of Hanover; Linda LeRoy, Braintree and Elizabeth Whalen, Quincy.

Jack served on many boards and commissions, especially of local Catholic causes; among these were the Board of Trustees of BC High; and of Catholic Charities Boston. An avid sportsman he raced in regattas with his sons; played golf in Milton, on the Cape and in Florida. He was also a Knight of Malta.

His spare death notice in local papers hid a very different side of Jack; his usual deflection of spotlight and attention probably explains this. His great accomplishment in business gave him the means to be, as he liked to say, a "cheerful giver." And that he did to many causes; the same death notices listed a few of his favorites: Labouré Center, South Boston; my Brother's Keeper, Easton; and both St. John's and Blessed John seminaries, in Brighton and Weston, respectively.

His outreach was not only to such causes, but more personal as well. One friend of his whom he encountered over a decade ago at Brother's Keeper and became close to him "Inspired me to attend Mass daily, to spend time in adoration of Christ in the Eucharist; and to give of yourself."

Although he was 86, he had been in relatively good health until two weeks ago when a sudden decline began. Characteristically, he asked God for a few days to get his house in order, especially to await the return from England of his son Stephen. With that arrival and all in order, Jack died on Nov. 27.

Cardinal Seán P. O'Malley was the principal celebrant of the Funeral Mass at St. Elizabeth Church, Milton on Nov. 30.

Following the Mass, Mr. Shaughnessy was buried in Milton Cemetery with his wife Mary.