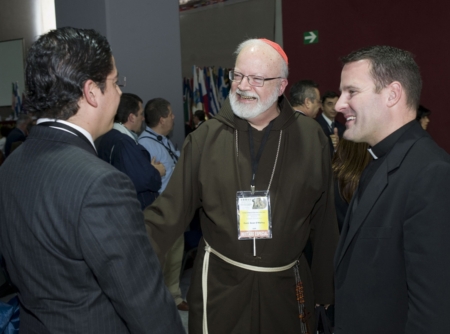 ...I joined about 80 of my brother bishops in attending the conference 'Our Lady of Guadalupe, Star of the New Evangelization on the American Continent,' in Mexico City on the new evangelization of the Americas.' CNS photo/David Maung

...On Sunday (11/17), afternoon almost 1,500 members of the Vietnamese Catholic community gathered at the Cathedral for Mass in anticipation of the Feast of the Vietnamese Martyrs, celebrated on November 24. The Archdiocese is blessed by the presence of a thriving Vietnamese community whose faith, devotion and dedication to family enriches our spiritual life. I look forward to joining them for this annual Mass next year. Also this week I was very happy to see that the wonderful success of St. Paul's Choir School in Cambridge has been receiving a lot of attention. As part of the celebration of the 50th anniversary of the school, a couple weeks ago they made a trip to the Vatican where they had the honor of being able to sing for the Holy Father. And this morning, they were featured on Fox 25 news here in Boston. We congratulate the faculty, staff and students of the Choir School!

At the Americas conference

Earlier this week, I joined about 80 of my brother bishops in attending the conference "Our Lady of Guadalupe, Star of the New Evangelization on the American Continent," in Mexico City on the new evangelization of the Americas.

In the year 2000 there had been a synod for the Americas, and out of that came the document called "Ecclesia in America," in which Pope John Paul II called for greater cooperation and collaboration among the Catholics of this hemisphere. For a long time nothing specific was done to promote that, but Cardinal Ouellette who is now the head of the Pontifical Commission for Latin America called for a meeting last year in Rome, to which I was invited to give a talk. Now this year, in Mexico he brought together bishops from Canada, the United States, Central America, South America and the Caribbean to again address this topic. This was really a wonderful experience, truly a pilgrimage.

....The conference was a very prayerful experience with many rosaries, Masses, processions and opportunities for us to pray at the Basilica. Cardinal Norberto Rivera, the Archbishop of Mexico City is always a very gracious host....I was part of a panel with Cardinal Maradiaga of Tegucigalpa and Cardinal Robles of Guadalajara. The three of us talked about culture, society and the new evangelization.

In my reflections, I spoke of the differences between the cultural Catholicism we had in the past and the need for a new evangelization in a world where people's participation in the Church is less driven by their membership in a particular ethnic group or culture, but now must be a more personal, intentional decision. I said that will require another type of evangelization, and much of it has to be done one-on-one. This certainly underscores the need to prepare the laity for this role, because the clergy and religious would never have the numbers that would be required to be able to reach the people in that way. So, there really is a great need for a new apologetic, responding to the questions that people in today's world have. I also spoke about marriage, particularly the way in which cohabitation is beginning to become so generally accepted as a so-called preparation for -- or even a substitute for -- marriage and the negative impact that has on family life. I also talked about the importance of immigration, about the way the Church has to be attentive to the immigrant population and prepare for a future in which the majority of Catholics in United States will be Hispanic. I talked about the fact that the protection of children must be a priority for the Church, and that I hoped the policies that the U.S. Bishops Conference have developed will be useful to the other conferences as they continue to move forward on this issue.