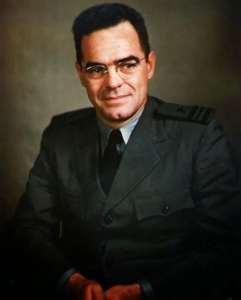 Military heroes move me. At Baltimore-Washington International Airport I've cried. Once it was when I stood with others at attention as a fallen hero in a flag-draped coffin was carried to his final flight home.

Another time was when I met veterans in red tee-shirts and blue baseball caps in wheelchairs, in town to visit the World War II memorial.

Heroes came to mind most recently when I learned that five military chaplains since the Civil War awarded the Medal of Honor were Catholic priests. One of them, Father Emil Kapaun, an Army chaplain from Kansas, died as a prisoner of war in Korea. Another, Father Vincent Capodanno, a Maryknoll priest from Staten Island, New York, died when, despite his own war injuries, he tended injured Marines during battle in Vietnam. The Navy named the USS Capodanno after him. The church has named both "Servants of God," a step toward becoming an officially recognized saint. That's achievement on two fronts.

The three other Medal of Honor winners have dramatic stories too. Father Joseph O'Callahan, a Jesuit priest and Navy chaplain in World War II, ministered to injured sailors on a ship hit by two bombs. He worked to jettison bombs close to exploding and led a group on a dangerous mission to water down other ammunition hot enough to explode. The Navy named the USS O'Callahan after him.

Father Charles J. Watters, from New Jersey, served in Vietnam. He rescued wounded men at the Battle of Dak To. He ran through intense gunfire to help wounded soldiers. He carried one man to safety. Once though injured himself, he moved about war zone to apply bandages and give food and water to other wounded. He died in the worst "friendly-fire" incident in Vietnam when he and 41 others were hit by shrapnel when a 500-pound bomb dropped by a Marine fighter hit a tree over the U.S. command post.

Father Angelo Liteky, who later changed his first name to "Charles," won his medal for carrying 20 wounded soldiers to safety during intense fighting on a search and destroy mission in Vietnam. Afterwards he became a peace activist, left the priesthood in 1975, and renounced his medal in 1986. It's on display at the National Museum of American History.

Veterans Day, Nov. 11, prompted me to touch base with seminarians who hope to emulate chaplain heroes.

James Hinkle, at North American College, Rome, comes from a Navy family and was Navy ROTC at the University of Notre Dame. He served in several positions in the Navy but the call to the priesthood dogged him.

"It was my absolute privilege to serve in the U.S. Navy. Now I look forward to rejoining the fleet as a chaplain," he said. He spoke of Fathers Kapaun and Capodanno, and the priest who baptized him as an infant, Father Jake Francis Laboon. "None of them lived for themselves," he said. "Instead, in Jesus' name, they chose to pick up not just their own crosses, but also the crosses of the men and women in their care."

Paul Shovelain, of the Archdiocese of St. Paul and Minneapolis and a prospective Army chaplain, thinks of Father Kapaun. "When I fast," he said in a blog post, "I think of the small amounts of food he survived on."

Christopher Christensen, at St. Charles Borromeo Seminary in the Archdiocese of Philadelphia, is a prospective Navy chaplain. He was a Navy man before, but this new position finds him "humbled by the prospect of serving God and country in such a unique ministry."

Veterans Day is a day for heroes and saints in uniform. They do us proud.

Sister Mary Ann Walsh is Director of Media Relations, United States Conference of Catholic Bishops and a Sister of Mercy.