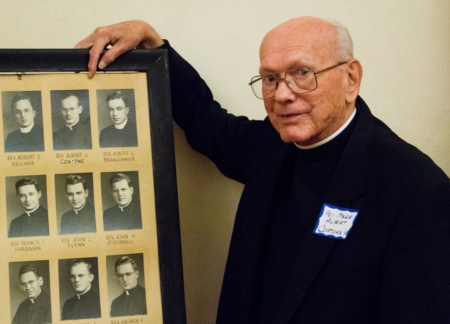 Msgr. Albert Contons points to a picture of himself in the 1948 St. John's Seminary class photo. The monsignor was among those priests attending the seminary's annual Alumni Dinner, Oct. 25. Pilot photo/Christopher S. Pineo

BRIGHTON -- Alumni of St. John's Seminary from all over New England were welcomed back to their "spiritual home" Oct. 25 as they gathered for the seminary's annual Alumni Dinner.

The evening began with a Holy Hour in the seminary chapel followed by a reception that gave classmates a chance to reconnect and gave older priests a chance to get to know seminarians and the recently ordained.

As they gathered for dinner in the seminary refectory, Msgr. James P. Moroney welcomed the men and updated the men on developments at the seminary.

Msgr. Moroney stressed the importance of bringing together priests from multiple dioceses, generations, classes and states in the sense of fraternity provided by the dinner.

"Welcome home. Welcome home to St. John's, to a seminary experiencing an unprecedented period of growth as evidenced by our 26 new men, and the fact that we have just this year become the sixth largest theologate serving the United States today," Msgr. Moroney said.

"Welcome home to the place where you learned how to pray, how to preach a word that will rouse them, and how to love those whom everyone else would forget," he said.

Msgr. Moroney reported that, with the addition of the Our Lady of the Presentation Lecture Hall and Library, the seminary now exists on three campuses, with 130 seminarians enrolled. He also added that Bishop Frank J. Caggiano plans to soon send more seminarians from the Diocese of Bridgeport, Conn.

He also told them that Cardinal Justin Rigali, Archbishop Emeritus of Philadelphia, and Cardinal Francis George, OMI, Archbishop of Chicago, had recently presented talks as part of an ongoing lecture series and that faculty member Father Romanus Cessario, OP, has become the newest master of the Dominican Order. However, he mainly stressed the importance of the work of forming today's seminarians.

Entertainment for the evening included classical music by a duet of seminarians. Stephen Poirier played the violin, accompanied by Stephen Lundrigan on the piano.

Guests at the dinner also heard remarks from Deacon Chris Micale, currently the oldest seminarian enrolled, who is studying for the Diocese of Burlington, Vt.

In his remarks, he described his hard-working father, in a time before color television, who he said could "carry a side of beef on his shoulder with the best of them."

He reflected on Ecclesiastes, saying that one cannot say in wisdom that former times were better than current. But he also added that as times change -- and events like leaky roofs disrupt day-to-day parish life -- priests such as the alumni provide stability to the faithful like his "pop" provided to his family all those years ago.

"My father carried his livelihood on his shoulder, you the weight of the Church, so to speak. You keep the store open and ready for business, you confect the Eucharist, and you administer the sacraments. You keep things stable, despite the disorder and chaos of the times in which we live," Deacon Micale said.

Seminarians in residence at the school attended the dinner and served drinks and appetizers before the main course. When the dinner began, seminarians served as waiters to each table from beginning to end of the three-course meal.

"As Msgr. Moroney said, we want you to feel that this is your spiritual home. We are very grateful to the outstanding rector, the faculty that we have, and the wonderful students. You have been exposed to some of them tonight. We have been very, very blessed," he said.

Father John J. Shea, a senior priest who now lives in Marshfield, told The Pilot he reminisced to younger alumni about a seminary -- when he arrived there in 1953 -- with different rules from the seminary today.

"I did just tell some of the younger priests, in those days you couldn't talk above the first floor. Once you got to the second floor, you were in silence," Father Shea said.

By the time Father Shea graduated in 1961 he had studied at the Cardinal O'Connell Seminary, a minor seminary in Jamaica Plain, and at St. William's Hall, a Brighton building owned now by Boston College, before studying at the seminary -- spending a total of eight years preparing for the priesthood.

Father Albert J. Contons, a retired priest now living at Regina Cleri, said he came into the seminary in 1941and received ordination in 1948. He said things were very different in that time, however he was pleased to find one important similarity: the at-capacity enrollment in the seminary.

"It was great to hear about the progress of the seminary gathering new candidates and exploding at the seams. To see the maturity of these seminarians -- some of them have a good deal of life experience already," he said.

Seminarian Christopher Bae, who researched prosthetic limb technology at MIT before entering the seminary, said he felt a deep connection with those who walked the path before him through some moments of common experience at St. John's.

"Those priests were in the same chapel, like me, maybe 20 years ago or 30 years ago. They prayed, just like me, so in a sense I could feel the sense of community," Bae said.