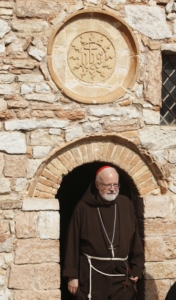 'Following lunch, we went to the Hermitage of the Carceri. They are called that because the cells are so tiny. The Holy Father went there to pray.' CNS photo/Paul Haring

On Friday (10/4), the feast day of St. Francis of Assisi, we went in military helicopters from Vatican City to Assisi. It was about a 40 minute flight, and we arrived in Assisi, the first place we went to was the Instituto Serafico, where the Holy Father met with about 100 disabled children, their caretakers and families. The Holy Father greeted each child, blessed them and kissed them.

He then gave a very wonderful talk, in which he compared the children to the wounds on Jesus's body. He said when the resurrected Christ came back, all of the bruises and scars were gone but the wounds of the crucifixion on his hands, feet and side were still there, and he took those wounds to heaven. He said the children are the wounds of Jesus, and if we worship Jesus present in them, then we will someday be able to worship the wounds of Christ that are now in heaven.

...we went to Santa Maria Maggiore, which is the Capuchin church in Assisi. In fact, we did not have a church there until a few years ago, when the bishop gave the church to us. Our general, Father Mauro Johri, and a group of Capuchins greeted the Holy Father there. Santa Maria Maggiore was the original Cathedral of Assisi and is where St. Francis and St. Clare were baptized, though the baptismal font has since been moved to San Rufino, the new Cathedral.

Then we went to the Basilica Superiore di San Francesco. There we were greeted by the Conventual Friars and by Prime Minister Enrico Letta. The Holy Father celebrated Mass in the main piazza of the Basilica. At the end of Mass, as they do every year on the Feast, they blessed the oil that is burned in the lamp before the tomb of St. Francis, the Patron Saint of Italy. So, there were a number of elected officials from the different townships and cities in Umbria present.

Following lunch, we went to the Hermitage of the Carceri. They are called that because the cells are so tiny. The Holy Father went there to pray. The original Carceri was built by Saint Bernadino.

...Then, in the afternoon, we went to the Basilica of the Santa Maria degli Angeli of the Portiuncula where there were thousands of young people gathered in the plaza. The Holy Father addressed them and answered their questions. He visited the Portiuncula, where St. Francis established the order, which is contained within the basilica.

After the rally with the youth at the Portiuncula, we traveled to Rivotorto, which are the little cottages where Francis and the first Friars stayed.

Our time in Assisi was very moving, particularly in the visit with the children, and everywhere we went the crowds were just enormous. It was a very beautiful way to end our time with the Holy Father.

...I want to conclude this week asking everyone to pray for the Holy Father, who faces many challenges in this moment in the life of the Church. He is always asking for prayers, and so I want to echo that request. He feels it is important that the Catholics of the world be united with him in prayer so that the Holy Spirit will guide him on the path that will bring healing and peace to our Church and to bring energy to the task of the new evangelization.