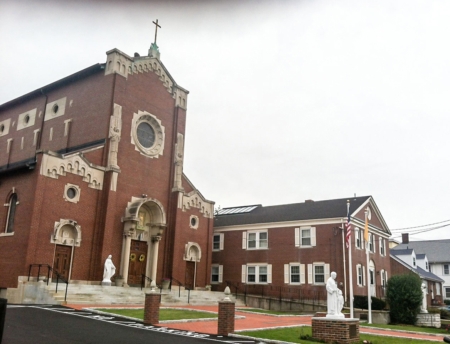 Located in the historic Orient Heights district of East Boston, St. Lazarus Church -- now called St. Joseph-St. Lazarus Church -- was erected in 1922 for a congregation of primarily Italian immigrants. In December 2011, the Boston Preservation Priorities Report named it a high priority for restoration after extensive water damage and overall deterioration.

According to the Preservation Alliance, "The community bemoaned its deterioration and disrepair, but rather than give up they opted to tackle the problem. Parishioners recognized the church where many have worshipped their entire lives as a symbol of the heritage of the neighborhood."

The Preservation Alliance called the restoration of the church a "testament to the resolve of the parish community and of the importance religious properties hold to neighborhoods. Restoring St. Joseph-St. Lazarus was integral to the spirit and personality of the community, and community members rallied financially around its preservation."

Complete restoration of the church included repairs to the roof and restoring plaster, flooring, and the religious art of the church. Without ever interrupting weekend religious services the interior was successfully fully restored -- from sacred paintings to frescoes and statues to the pews.

"The restoration of this historic church is incredibly meaningful for the current population of Orient Heights, and undoubtedly will be for generations to come," Preservation Alliance said.

"It is incredibly meaningful when a community rallies to save its own historic resources, even when the odds for success seem small. We should all be inspired by the resolve which led a small group to complete this monumental and beautifully successful project," said Greg Galer, executive director of the Boston Preservation Alliance.