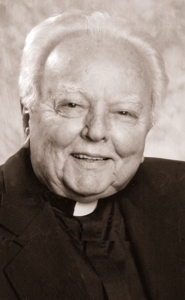 A priest of the archdiocese since his ordination in 1957, Father Henry Boivin died on Oct. 4 at Regina Cleri Residence where he had been living since 2011.

Born in Boston on Jan. 8, 1929 he was the only son of the four children of the late Frank and Germaine (DesMaisons) Boivin. He was baptized at St. Peter Church, Dorchester, and attended Boston English High School. Following high school, he worked briefly for an insurance company and studied accounting and commercial art at the Vesper George School in Boston's Back Bay.

He began his preparation for the priesthood, first at St. Philip Neri School, Boston, then newly founded to give future seminary students course work, especially in classical languages, for their subsequent seminary formation. He continued his seminary studies at St. Thomas, Bloomfield, Conn. and St. Mary, Baltimore before enrolling as a member of the Class of 1957 at St. John's, Brighton.

He served for one term (1982-1988) as pastor of St. Mary Parish in Franklin; following that assignment, he took part in the Priestly Renewal (Sabbatical Program) at St. Patrick Seminary, Menlo Park, Calif.

On his return to the archdiocese, he served briefly as a parochial vicar at St. Agatha, Milton and from 1988-1990 in the same office at St. Clare, Braintree.

On June 12, 1990, Cardinal Law named him pastor of Holy Ghost Parish in Whitman where he served until his retirement on May 31, 1999. At Whitman, he built on solid foundations of preceding pastors; strengthening the St. Vincent de Paul Society; promoting vocations and overseeing major upgrades to the physical plant.

In retirement to his own home in Braintree, he made himself available to local parishes on the South Shore.

Father Boivin's Funeral Mass was celebrated at Immaculate Conception Church, Weymouth on Oct. 10. Msgr. Peter Martocchio was the principal celebrant and Father Lawrence Drennan was the homilist with South Regional Bishop John Dooher in attendance and presiding at the Final Commendation.