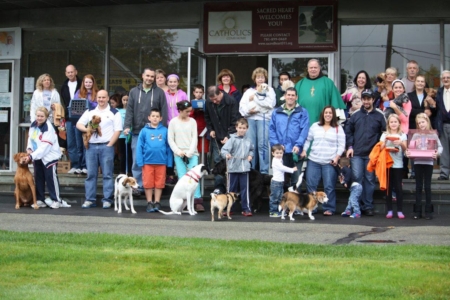 WALTHAM -- The old saying that a man's best friend is his dog could in many cases equally be applied to cats, turtles, fish or guinea pigs.

That special relationship of people to their pets was celebrated at a number of parishes throughout the archdiocese this week with a special blessing of the animals held around the Feast of St. Francis of Assisi, Oct. 4. Parishes hold such blessings to recognize the special connection of St. Francis to animals as part of creation given over to the care of humanity by God.

Many parishes held the blessings outside, but some allowed animals inside the church with restrictions regarding the most sacred areas of the church. In the case of Sacred Heart Parish in Waltham, pet owners and pets came inside to avoid the rain Oct. 6.

"It is a way of sharing St. Francis and his love of creatures, and the love of pets, and the environment with the parishioners, the adults and the kids," said Franciscan Father Dennis Wheatley, the pastor of Sacred Heart.

At Sacred Heart, some children also brought stuffed animals for the blessing.

Father Wheatley said the tradition spread beyond Franciscan communities over the years, while maintaining a Franciscan root.

"The blessing has been a long-standing tradition with all of the Franciscan friars and all of the different families of friars. It goes back to St. Francis of Assisi, when he was starting his ministry," Father Wheatley said.

Stories of St. Francis demonstrate his affinity for animals as part of God's creation.

In one story the saint tamed a wolf that had been terrorizing a small village. When confronted by the saint, the wolf presented its paw as it pledged to change its ravenous ways. In another story, St. Francis and some of his early followers gave up the shelter of a small hovel to accommodate a donkey.

"I think it is wonderful that our pope took the name of Francis," Father Wheatley said.

"He is a great, great man and he is going to spread the love of Francis for all of God's creatures and to all people. That's a wonderful thing, that I think he is being very pastoral with that," he said.