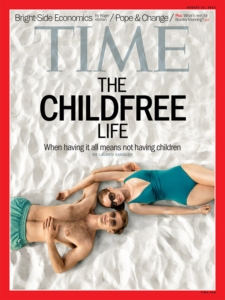 BOSTON -- A recent Time magazine cover story touted the virtues of living married life or single life unencumbered by children, Aug. 12, but some Catholics with connections to the Archdiocese of Boston remained unconvinced that the premise reflected reality or that children are a burden not a blessing.

Lauren Sandler's article entitled "None is Enough", and promoted on the cover with "The Childfree Life: When Having it all Means not Having Children," proposed that American society views women primarily as potential mothers, places a social imperative on them to have children, and excludes women who do not want children from public discussions regarding the issue.

Janet Benestad, secretary for faith formation and evangelization for the Archdiocese of Boston, took on some issues raised in the article.

In her article, Sandler said in that a December New York Times column and the recent book "What to Expect When No One's Expecting," had "scolded" childless women by exploring the impact of declining birthrates on society.

"That's not scolding, that's a reality," Benestad pointed out.

Benestad took issue with the article for rejecting the idea of children as a centerpiece of marriage, because it also rejected the institution of marriage as a societal solution to the question of procreation across vast spans of human history and various cultures.

Benestad said she could understand why single people or those without children might feel excluded when bombarded by advertising for baby or domestic products but, contrary to the article, said many commercials present a picture of a single, carefree and unattached lifestyle as the norm, such as those advertising beer or travel websites.

"All of that is directed at people who don't have family responsibilities," she said.

Benestad said she saw that the article presented people who decided not to have children as self-sacrificing because their decision was based on the fact that they would not be "great parents."

"Let's have a reality check here. Who is a great parent?" she asked.

Benestad pointed to a graphic accompanying the article that presented celebrity thoughts on motherhood and children, and noted that a quote from Katherine Hepburn in which she said she "had a very high standard of how a mother and father should behave" and remained childless because she didn't feel she could meet those standards.

She said parenting comes down to doing the best that one can, not an attempt to exceed reasonable expectations or meet the standards set by movie stars.

"To create those kinds of expectations is just a false reality," Benestad said.

She said the article overlooked attitudes of those young people who harbor resentment toward their own parents, which she said she encountered when she taught at the University of Scranton.

"You have an awful lot of young people who have been hurt by failed marriages and different other sociological and psychological problems, and they're saying 'I don't want to be that. If I'm going to be a parent, I want to do it right,'" she said.

Benestad said she would have questioned the author about overlooking the idea of families as a building-block for structures of stable societies and nations.

"Where is all of that? How does that figure into this decision that you're talking about?" she asked.

Pilot columnist and philosophy chair at Ave Maria University Michael Pakaluk said the article tried but failed to address the opposing viewpoint robustly. Consequently, he said, he would have given it a C if submitted to him in a classroom setting.

"Also, you need to be clear about what your thesis is, and what your argument is for that thesis. This article does neither of these things," he said.

The article did assert that society in America tends to view womanhood in the context of motherhood.

"That's just a false statement in the article. In our society everybody thinks in terms of young people, so womanhood would be young women, and people think of young women not in terms of motherhood, but in terms of sex -- as sex objects," he said.

Pakaluk, a father of 14 children, called upon Catholics to understand and teach the reasons why Catholics support families as fundamental to society.

"We are dealing with a society in which people are carrying on still in a Christian tradition, but without knowing the reasons for that tradition. It's very important for Catholics in catechesis to give the reasons for these things. There are lots of them, but Catholics should have all the reasons available," he said.

He recommended that Catholics read the encyclical of Pope Pius XI, "Casti Canubii," which he called the best single document in the magisterium about marriage.

From works of Pope John Paul II he recommended the apostolic exhortation "Familiaris Consortio" on the role of the Catholic family in the modern world and "Theology of the Body."

He also gave reasons to have children from a Catholic standpoint. He said having children allows a couple to "embody one flesh" with the child as a melding of the mother and father, offers a chance to do something with everlasting significance, and magnifies the effects of one's own efforts, life, and work while children act "as the arrows in one's quiver."

He said parents can be constantly inspired to rediscover their own childhood as they have the example of children always present. He said the act of giving is better than receiving, adding that "to have children is to commit oneself to a life of constant giving."

"It's good to pour oneself out 100 percent in this life, not holding anything back: it's like an athlete at the end of a competition wants to know that he gave 100 percent," Pakaluk said.

Speaking of the family as a societal building block, he said one of the best ways to contribute to society is to contribute good citizens. He said "large families are simply more fun" and a "constant source of activities that are highly meritorious in the sight of God.

Also reacting to the article were Angela and David Franks, parents of six children who serve as professors of theology for Saint John's Seminary's Theological Institute for the New Evangelization in Brighton.

He said the article and its presentation mischaracterized marriages that remain open to life, and overlooked entirely that single people might consider devotion to God through religious life or ordination.

"What's at stake in a marriage that is open to life, or in religious life, is the hard work of maturing under the conditions of self-sacrificial love. That kind of context is completely missing from this piece because it is so focused on a consumerist lifestyle of fulfillment," he said.

He noted that the article explored the issue of the baby-care market putting pressure on people who don't want children, but added that the industry -- which the article reports as reaching the $62.3 trillion mark by 2017 -- also puts a strain on those who chose to have children by promoting a false set of needs.

"That's not good for parenthood. The fact is, consumerism sets up parenthood for failure," David said.

He said the Church and her teachings offer paths, including religious life and marriage open to life, which lead away from the unhappiness created by consumerism -- paths to "authentic happiness."

Angela Franks remarked on a quote from one of the sources in the article who said motherhood takes a full commitment of a woman's entire self.

"I think that that really hits at the heart of the problem, because it does. Anything that is worth doing of course, even marriage without children, should take all of you. But, certainly parenting does take all of you. It requires an extraordinary gift of self," she said.

She said the article presented a common societal theme, that one should be wary of giving too much while scrambling to acquire more for oneself, as a means of finding fulfillment.

"That's really what, in our culture, we flee from. We are worried about giving too much of ourselves, because too many people have had a negative experience of love and they just don't trust love. So, they take the safe route, which is to not love and not give," she said.