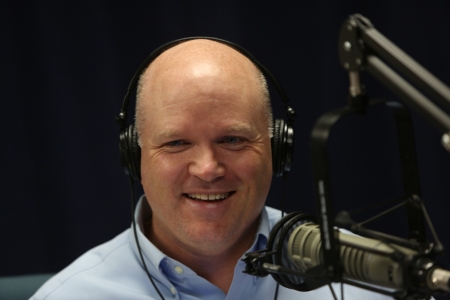 BRAINTREE -- The Archdiocese of Boston announced Aug. 29 that Scot Landry, Secretary for Catholic Media and President and CEO of iCatholic Media, will leave his current duties to become Executive Director of Catholic Voices USA, a national apostolate that seeks to prepare lay Catholics to articulate, share and defend the Catholic faith.

Landry, who has been with the archdiocese's Central Ministries since 2006, will transition to his new position in September. He will continue to assist Cardinal Seán P. O'Malley as a Consultant, write columns for The Pilot, and serve as one of the hosts of The Good Catholic Life radio program.

"Scot Landry has assisted me on many important initiatives over the past seven years," said Cardinal O'Malley. "His gifts for leadership, organization, training and communication have helped the Archdiocese of Boston greatly. Catholic Voices is an important new initiative and its approach to civil communication on challenging cultural issues will be helpful locally and nationally under Scot's leadership. He will also continue to be an active participant in the life of the archdiocese, where his passion for outreach and evangelization are a blessing for us. I welcome Scot's continued collaboration and involvement as we go forward with the mission of the Church."

Bishop Robert P. Deeley, Vicar General of the Archdiocese of Boston, said, "I am grateful to Scot for the wonderful leadership he has offered as a member of Cardinal Seán's Cabinet these past seven years, first as Secretary for Institutional Advancement and then as Secretary for Catholic Media."

"Scot has been generous in sharing his many gifts for the strengthening of the local Church here in the archdiocese. He has been particularly helpful in our efforts regarding evangelization. I hope his new endeavors, which will build on his abilities in media and evangelization, will bring him much happiness," he added.

Landry said, "I am very excited for the opportunity to lead the Catholic Voices apostolate and to continue to participate in the Church's New Evangelization efforts."

"It remains one of the biggest honors of my life to have been asked by Cardinal Seán seven years ago to assist him and so many others in leadership positions for the Archdiocese of Boston to renew the Catholic Church here," said Landry.

Landry joined the archdiocese in 2006 as Secretary for Institutional Advancement. In that role, he oversaw an increase of financial support to the Central Ministries of the Archdiocese of Boston through the Catholic Appeal each year, implemented new training programs on stewardship and fundraising for parish leaders and was instrumental in the Improved Financial Relationship Model (IFRM).

Given the rapid growth in media and because of his commitment to the New Evangelization, Cardinal O'Malley moved to establish a new Secretariat for Catholic Media in July 2010 and named Landry its first Cabinet Secretary. Among his accomplishments in that role, Landry established Pilot Bulletins and Pilot Printing, he helped bring a Catholic Radio station WQOM to the archdiocese, he launched and hosted a live local daily program on Catholic radio called "The Good Catholic Life," he led Archdiocesan efforts to utilize Social Media for communication and evangelization, he led the revision of the Pilot Catholic Directory of the Archdiocese of Boston, and he worked with leaders of The Pilot newspaper and CatholicTV to strengthen those critical ministries.

Landry was part of the team that managed and led many important Archdiocesan initiatives during his tenure, such as Catholics Come Home, The Light is on for You, the educational campaign to prevent assisted suicide in the Commonwealth of Massachusetts, the organization of 3,000 Boston-area participants at the 2008 Papal Mass at Yankee Stadium, and coverage of the 2013 Papal Conclave from Rome.

Landry is a graduate of Harvard Business School and Harvard College. Originally from Lowell he resides with his wife and children in Belmont.

Cardinal O'Malley will begin a process, working with Sister Marian Batho, chair of the iCatholic Media Board of Trustees, to determine roles and responsibilities related to the leadership of the iCatholic Media Corporation. As President of the CatholicTV Network, Father Robert Reed will continue to run CatholicTV operations. As President of the Pilot Media Group, Antonio Enrique will continue to guide the ministries of The Pilot Newspaper, Pilot Catholic Directory, Pilot Bulletins, Pilot Printing and Pilot New Media.