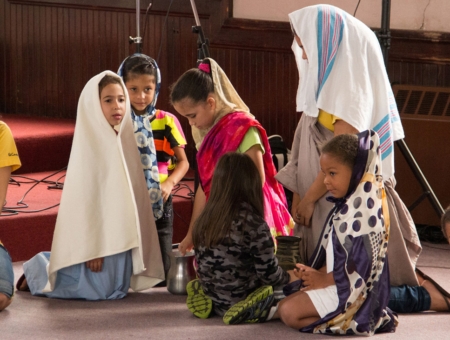 Youth act out scenes from the Luminous Mysteries during the praying of the rosary. Pilot photo/Christopher S. Pineo

LAWRENCE -- School vacations are intended to be fun and relaxing -- or even enriching -- but all too often they simply leave children looking for something to do. The Franciscans of Primitive Observance are working to fill that need for the children in Lawrence with their Youth Days program.

Three Franciscans of Primitive Observance and a group of volunteers organized a retreat for young people and children from Aug. 5 through Aug. 8 at the former Sts. Peter and Paul Church in Lawrence, providing an opportunity for local children to play, pray, eat and learn about their Catholic faith together.

The eight-hour days included opportunities for prayer, reflection and sacraments, as children, young people and their parents gathered inside the former church to celebrate Mass with the gray-robed friars, who made the Sacrament of Reconciliation available all day.

"We have a team of wonderful ladies working the kitchen. The kids have food -- two full meals and snacks. This is really a work of God. We were all praying that this would happen," said Father Joseph P. Medio, FPO, who has organized the event regularly since 2006.

Father Medio said the Franciscans of Primitive Observance started organizing groups of children to come together to play, learn about the Church, and celebrate Mass when they lived at a friary in Lawrence from 2005 through 2011.

"We are really big about meeting the people in the neighborhood where we live," he said.

When a local Catholic school closed, the Franciscans of Primitive Observance saw a need to present Catholic formation opportunities to young people and children in the community.

"We started by playing some football out on the common there, about a quarter mile up the road. We decided: You know what? We're going to get these kids together once a month. We are going to play with them and we are going to have Mass, and it just grew," he said.

In 2006 -- when Father Medio first organized what he then called Play and Pray -- the gatherings became more regular and eventually evolved into the current version of the retreat that he now calls Youth Days.

"The youth, as you know, are the future of the Church. They need to learn how to pray and how to love one-another as good Catholic Christians," Father Medio said.

On Aug. 8, the day The Pilot visited the program, the children started their morning acting out the scenes recalled in the Luminous Mysteries, as they prayed the rosary together.

Children received catechesis teachings in small groups as well, learning and discussing aspects of the faith with leaders, volunteers and each other.

"They have had the opportunity this week to hear some good homilies and to have some really awesome catechists teach them the faith a little more deeply," he said.

Father Medio said the volunteers helping with the activities really allowed him to spend more time available to hear confession and interact with the young people and children at the event.

One volunteer, Arlene Quezada, 22, a graduate of Emmanuel College and a Lawrence native, gave a testimony at the retreat in which she shared her experiences from World Youth Day in Rio de Janeiro, Brazil.

"I told them how I knew I was called to go to Rio, regardless of what was going on in my life," she said.

She had to schedule her trip to Rio despite the pressures of wrapping up her studies and preparing to enter the job market.

She said her love for helping people led her to volunteer with Father Medio for the pilgrimage to Brazil and to help him with the retreat for the children afterward.

The priests at the retreat celebrated Mass for the children -- many of whom sat on the floor because pews were removed from the church after it closed. The children made room in the few chairs for older volunteers, adults who arrived to attend Mass, and the parents of some of the children.

Father Andrew Beauregard, FPO, continued the teaching theme of the day in his homily, incorporating lessons about the Catholic faith.

He spoke about St. Peter, St. Dominic -- whose feast day fell on the final day of the retreat, and other popes and teachers in the Church. He explained that the teachings of the Church delivered by these teachers present real truth, and even worked in a quick Latin lesson.

"The word in Latin is 'Veritas.' They, along with other great teachers of the Church, taught and teach us true things about Jesus -- or true doctrine. They have a love of what the Church teaches us," Father Beauregard said.

He asked the children who the current pope is.

"Pope Francis," some of the children called out.

He explained where Pope Francis fits according to the teaching of Jesus Christ to Peter in the Gospel.

"He is the 266th pope, or the 265th successor to St. Peter, the first pope. He is given a great task of the Church. He also is responsible to teach us true things about Jesus," Father Beauregard said.

Father Medio attributed the success of the retreat to the volunteers, young people and children who participated. He also thanked the current owner of the church building in Lawrence -- a fellow Christian who is not Catholic -- for lending the building to the community for the retreat.

"I didn't plan this. This was not my plan. This was God's plan and it is just so beautiful to see him working in the young people and giving us hope that the Church is not dead, but it's alive. These kids have high ideals. They want to live their faith," he said.

On the final day of the retreat Father Beauregard and Father Medio announced that the next such retreat is currently scheduled for Columbus Day on Oct. 14.