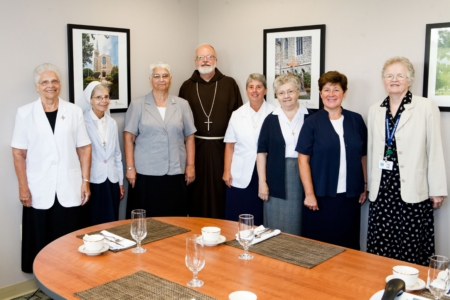 Saturday morning (7/27), the pope celebrated Mass with bishops, priests, religious and seminarians at the cathedral in Rio. The cathedral is quite a quite peculiar building, not like a traditional church. The cardinal next to me said it looked like an upside down ice cream cone. However, whatever it might lack in aesthetics, it certainly makes up for in capacity. I was told it can hold something like 20,000 people!

...He talked about our call to the priesthood and religious life and said it is important that we constantly rekindle our awareness of our call to a life of vocation, which we too often take for granted in the midst of our many duties and responsibilities. He encouraged us all to go back and remember the first time we experienced God's grace calling us to our vocation and taking strength from that moment to continue our call with joy, and to share that moment with others in efforts to inspire people to consider the religious vocation in a vigorous and efficacious way. He said we should be very proud of our vocation.

He then made a call to proclaim the Gospel, and said that many of us came to Rio accompanying the youth. He said it is our responsibility to kindle in them the desire to become missionary disciples. To do that, we need to spend time and be attentive to their dreams and successes and also to pay attention to their difficulties and their sorrows. He said we need to be patient and listening, accompanying our young people. We must tell young people to discover the courage and the joy of our faith, the joy of being loved personally by God, and invite them to a life of discipleship.

Lastly, he spoke about the need to promote a culture of encounter; he spoke very powerfully about this "economic humanism that has been imposed throughout the world" that creates a culture of exclusion, where the elderly, the unborn child, the poor are excluded and not relevant. He asked us to create a culture of encounter where everyone is part of a family, without excluding anyone. After the Mass, we had lunch with the Holy Father and then he gathered with all the bishops of Brazil.

Vocational call with the Neocatechumenal Way

That afternoon (7/29), I joined other bishops and cardinals attending a vocational gathering organized by the Neocatechumenal Way at one of the sites of the future Olympic Park on the outskirts of Rio. Over 60,000 youth from Neocatechumenal Way attended the meeting which was conducted by Kiko Arguello and was presided over by the Archbishop of Rio, Archbishop Orani Tempesta.

After many songs and a catechesis by Kiko, there was the vocational call, which is always one of the most impressive aspects of these gatherings. Three thousand young men and two thousand young women came to the stage showing their willingness to discern a call to the priesthood and religious life. Once on the stage, they all knelt down to receive a blessing from the bishops.

I was told several youth from Boston attending came forward at the call and I met a young man from Father Israel Rodriguez's home parish in Granada, Spain, who is joining the Capuchin order there.

Meeting with the Sisters of the Presentation of Mary

Last August, the Manchester and Methuen Provinces of the Sisters of the Presentation of Mary merged to become the United States Province. I always like to invite new leadership of religious orders present in the archdiocese for lunch. It gives me a chance to get to know them better and learn about the work they are doing. So, on Thursday (8/1), I met with the leadership team of the Sisters of the Presentation of Mary, Provincial Superior Sister Helene Cote, Sister Maria Rosa, Sister Claire Guerin, Sister Jacqueline Lambert, Sister Marie Henault, and Sister Janice Perrault. Sister Marian Batho prepared the meeting and gave me an opportunity to learn about their work among us. The sisters have a school in Methuen, Presentation of Mary Academy.

In the afternoon (8/1), I went to St. John's Seminary for the annual Vianney's cookout. The event is named for St. John Vianney, the patron saint of priests and is a relaxing day of priestly fraternity that begins with a talk followed by vespers. This year, Msgr. Dennis Sheehan and Father John Mulloy gave a very interesting talk about priestly ministry outside of the office of pastor. The day concludes with a barbeque on the grounds of the seminary.