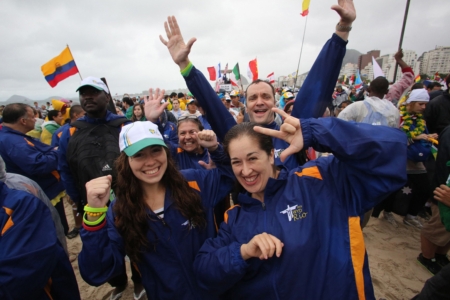 Father Shawn Carey, director of the deaf apostolate for the Archdiocese of Boston, puts his hands up for a photo with Boston pilgrims to the 28th World Youth Day in Rio de Janeiro, Brazil, July 23. Pilot photo/George Martell, Pilot Media Group

RIO -- As they started a seven-day pilgrimage July 22, 160 pilgrims sponsored by the Office of the New Evangelization of Youth and Young adults of the archdiocese joined Pope Francis and hundreds of thousands of young people from all over the world at the 28th World Youth Day in Rio de Janeiro, Brazil.

Five groups of pilgrims traveled aboard five flights out of Boston's Logan International Airport, traveling for more than 14 hours before reaching their destination.

At layovers between flights, the groups had scheduled Masses celebrated by priests on the trip; for others, the Masses in Brazil were scheduled at a location to be determined after arrival.

Father Matt Williams, director of new evangelization for youth and young adults, described an evening Mass pilgrims had on Sunday.

"That night we weren't able to have Mass in any of the churches, because the churches were not available, so we had Mass in the public square right where our hotel was," he said.

Also in the first days of the trip, Father Chris Hickey celebrated Mass for the pilgrims at one of Brazil's most famous landmarks, on a mountain called Corcovado.

"The chapel is built into the base of the Christ the Redeemer statue," Father Williams said.

The group attended a Mass at the Candelaria Church, in Rio de Janeiro, celebrated by Father Shawn Carey.

"As we were walking back, a lot of the roads were blocked off because the pope was driving around Rio, and a number of our kids got to see the Holy Father drive by -- which is pretty cool," Father Williams said.

The groups of pilgrims also took a tour of a favela -- a neighborhood where poor and working class people live in poverty -- close to where the pilgrims stayed. Father Williams said the trip provided a learning opportunity for pilgrims.

"We gave away rosary beads, and we were interacting with the children. It was a profound experience to help us to realize that dignity of the human person, that we are called to be missionaries. We are called to reverence the gift of life and to care for all of our brothers and sisters, especially the poor -- both the materially poor and the spiritually poor," Father Williams said.

When all the groups had arrived in Brazil, some pilgrims from Boston converged on Confeitaria Colombo, a local restaurant, for an evening to greet one-another in prayer as they gathered for a meal. The pilgrims had dinner on the second floor, overlooking the first floor of the restaurant.

"This week, Rio becomes the center of the Church, alive and young. All roads lead here. You have come from different parts of the world together for our shared faith and joy of discipleship. This happiness strengthens us and invites us to reach out to other young people, to make us missionaries to every nation," Archbishop Tempesta said in the homily.

One group leader with the Boston pilgrims said the group followed messages from the pope very closely as their trip began.

"We have been following the messages that the pope has been saying on the airplane over and since he arrived, and they have been really, really inspiring," said Danielle Olsen, mission coordinator and administrator for the Office for the New Evangelization of Youth and Young Adults.

Another large group of about 140 pilgrims sponsored by local Neocatechumenal Way communities departed for Brazil July 17 and were expected to visit different areas of the country, where they would be undertaking evangelization street missions before arriving in Rio for the vigil and Mass with the Holy Father July 27-28.

Pope Francis, who arrived on July 22, celebrated his first public Mass in Brazil the following day in the Basilica of the Shrine of Our Lady of Aparecida.

"When the Church looks for Jesus, she always knocks at his Mother's door and asks: 'Show us Jesus.' It is from Mary that the Church learns true discipleship. That is why the Church always goes out on mission in the footsteps of Mary," he said in his homily.

"Today, looking forward to the World Youth Day which has brought me to Brazil, I too come to knock on the door of the house of Mary -- who loved and raised Jesus -- that she may help all of us, pastors of God's people, parents and educators, to pass on to our young people the values that can help them build a nation and a world which are more just, united and fraternal," the pope said.

Pilgrims also attended catechesis events, including a talk by Cardinal Timothy Dolan, Archbishop of New York, and planned to attend an overnight vigil with Pope Francis that weekend, before Boston groups of pilgrims begin the journey home July 29. Cardinal Seán P. O'Malley was to celebrate Mass with the pilgrims on July 29, while all the pilgrims are still in Brazil.