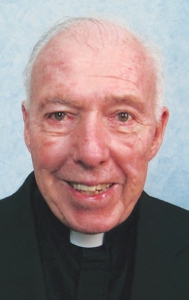 Father Henry J. "Skip" Jennings, who served at St. Joseph Parish in Somerville for nearly 46 years, passed to the Lord at Massachusetts General Hospital July 13. He was 83 years old.

Born July 3, 1930 in Allston, he was the eldest son of the late Harry and Mary (Genter) Jennings. He was the brother of Catherine and her husband James Savage, Louis Jennings and his wife Carole, all of Norwood and the uncle of Louis F. Jennings Jr., Christine E. Olson, Michelle Charpentier, Maureen Jennings, James R. Savage Jr., Steve Savage, Dr. Mary Brown and Cathy Savage-Eysie. He is also survived by many grandnieces and grandnephews.

Father Jennings grew up in St. Anthony's Parish in Allston. Not initially drawn to the priesthood, he attended Boston College, graduating in 1952 with a degree in economics. Shortly after graduation, he was drafted into the Korean War and served for two years in the U.S. Army.

After returning home, he received his master's degree in education from Boston State Teachers College and began a teaching career in Allston.

Encouraged to consider the priesthood by Msgr. Leonard Coppenrath, then at St. Aiden Parish in Brookline, Father Jennings entered St. John's Seminary in 1957. He was ordained to the priesthood on Feb. 2, 1962 by Bishop Jeremiah F. Minihan at St. Catherine of Siena Church in Norwood. He celebrated his first Mass at St. Anthony's Church in Allston.

During his four-and-a-half decades at St. Joseph's, Father Jennings baptized, married and served generations of parishioners until he was granted senior priest/retirement status on May 8, 2012.

He had been in residence at Regina Cleri since his retirement.

His funeral Mass was to be celebrated by Bishop Robert F. Hennessey in St. Joseph Church on July 20. Father Brian J. McHugh was to serve as the homilist and designated concelebrants included Msgr. Coppenrath and Father Linus Mendis.

Interment was at St. Joseph Cemetery in West Roxbury following the funeral.