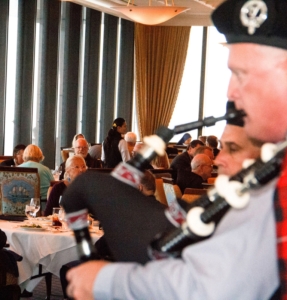 Cardinal Seán P. O'Malley watches a performance by Kevin Barry Irish American Pipes and Drums at a dinner honoring retired priests of the Archdiocese of Boston, June 26, cosponsored by the Boston College Club and the Order of Malta. Pilot photo/Christopher S. Pineo

BOSTON -- The Boston College Club and the Order of Malta gathered with senior priests to honor their service to the Archdiocese of Boston, June 26, at the Bank of America building with the archbishop, bishops, priests, former state officials and other Boston College Alumni.

"It's meant to be a night of lots of fun and celebration," James F. O'Connor, past area chair for the Order of Malta and a co-chair of the event, said.

O'Connor said the dinner has continued over 9 years as a way of thanking the priests for their service to the archdiocese.

"All retired priests from the archdiocese are invited and are members. The idea behind the thing is to thank the priests for their great many years of service, and invite them to a nice cocktail party and dinner, so that we can recognize them," O'Connor said.

Those who attended the event heard the music of local bagpipers Kevin Barry Irish American Pipes and Drum, and former state treasurer of Massachusetts Bob Crane and the Treasury Notes.

"They are all former employees of the state treasurer, all retired now. They have been playing concerts and this sort of thing for older folks for some time now. Bob is a personal friend and neighbor of Jack's and I as well, so we signed him up and he loves doing it," O'Connor said.

Featuring music from earlier generations at the celebration, the entertainers engaged the crowd, spurring some impromptu performances.

"A lot of those priests know those songs for many years, and they love to sing them. We even get the cardinal into it now," said O'Connor.

"He loves to do it, and he has told me on many occasions it is one of his favorite things he does," O'Connor said.

Retired priest Msgr. Paul McManus received a particular surprise as the sold-out crowd honored him and celebrated his recent birthday.

Joyce said the event is the most satisfying event of the year for the club.

"It is the most satisfying event in the year because we invite the retired priests to celebrate their service to the Church and to the archdiocese and thank them very much for their efforts over the years," Joyce said.

"On behalf of the Order of Malta we give thanks to Jim and Jack for creating this, sustaining and growing it in a way that provides such a wonderful evening, not only for our senior priests, but for all who attend," DeVasto said.