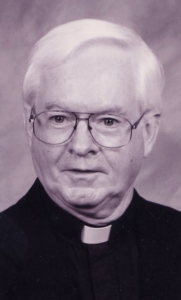 Born April 2, 1937 in Boston, he was one of seven children of Patrick F. and Winifred (Grealish) Geary. He was the brother of Patricia of Brighton, Robert of Arlington, Eileen Bellingrath of Georgia, Joan of Newton, Anne Sullivan of Andover and the late Margaret Sudbey of Newton.

Father Geary was raised in Allston and was a son of St. Anthony of Padua Parish. He attended his parish grammar school and then St. Columbkille High School in Brighton. He went on to receive his bachelor's degree from Boston College and studied for the priesthood at St. John's Seminary. He was ordained on Feb. 6, 1964 at the Cathedral of Holy Cross by Cardinal Richard Cushing.

In addition to his parish assignments, he also served as a member of the Archdiocesan Presbyteral Council and as vicar forane of the Chelmsford Vicariate in the archdiocese's Merrimack Region from 1996-1997.

His funeral Mass was celebrated by Msgr. George F. Carlson at Holy Name Church in West Roxbury on June 29. Father Francis M. Conroy was the homilist and Father David J. Barnes was a designated concelebrant.

Interment was at Newton Cemetery on Walnut Street in Newton immediately following the funeral.