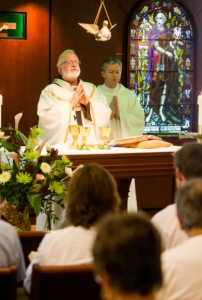 BRAINTREE -- Cardinal Seán P. O'Malley celebrated Mass at the Pastoral Center in Braintree to mark the Fortnight for Freedom, June 26.

The Mass comes just over a month before the scheduled final implementation of a federal contraceptive mandate that could force the Church to provide contraceptive coverage to all employees at Catholic institutions, which the Church sees as a violation of religious rights guaranteed by the constitution.

The U.S. bishops' second annual Fortnight for Freedom -- a period of prayer and fasting in response to the mandate produced under the Patient Protection and Affordable Care Act in 2010, commonly called "Obamacare" -- began June 21 and runs through July 4 to raise awareness of challenges to religious liberty in the United States and internationally.

"Last year the Bishops Conference established this Fortnight for Freedom, a period that begins with the feast of the martyrs St. John Fisher and St. Thomas More and goes for two weeks until the Fourth of July, which is of course the anniversary of our American Revolution and our birth as a country," Cardinal O'Malley said.

With Aug. 1 approaching, the date final rules take effect for implementing the federal contraceptive mandate requiring most employers to provide contraceptive coverage for employees, the cardinal spoke about the issue of conscience protection in his homily.

He said in the past the Church saw opposition focused on its teachings on the Eucharist and God. Now, however, challenges are aimed at the Church's teaching on the dignity of the human person.

"It's always around issues of the Gospel of Life and the sacredness of marriage that the Church is under attack," he said.

Earlier in the day, the Supreme Court issued decisions in two cases affecting the definition of marriage. The court dismissed a challenge to the constitutionality of California's Proposition 8, a voter-approved initiative preserving the traditional definition of marriage, and ruled the federal Defense of Marriage Act unconstitutional by a 5-4 vote.

But, he also noted that in other countries Catholics regularly face the threat of violence and death.

"Thousands of Catholics in the last year have lost their lives because of our faith. Others have been displaced from their homeland, and still others have been imprisoned or tortured. We want to keep them present in our prayers and feel solidarity with those Catholics throughout the world," he said.

He said people needed to stand up for their faith, and commended the work of U.S. citizens who gave public comment on the contraception mandate in a public comment period, which ended in April.

"It was very consoling when almost a half a million people wrote in. The government has never had that kind of response to a request for comment on regulations that they were proposing. So, we are hoping that those recommendations, of the Church's urging, and those of other churches, will indeed receive a hearing from the government. We need Catholics, and other people of faith, to stand together, to be able to defend our religious freedom," he said.

After the Mass, Anthony Vercollone, 27, a parishioner of St. Thecla's in Pembroke, said the cardinal kept his message clear and simple while maintaining the depth of the issues he addressed.

"He also hit a lot of deep points about the human person, and how Pope Francis and his movement toward serving the poor is actually leading us to reveal more to society and to the world how we see the human and what the purpose is of life," he said.

Maria Perdomo, 24, a parishioner at Sacred Heart in Newton, said she feels that standing up for religious freedom in a way that bolsters Catholic institutions in the public square, and not just behind closed doors in a church.

"As Catholics, we need our voices to be heard in order for other people's lives to change as well. If we aren't speaking up, then who is going to? We can't expect someone else to stand up. We can't just wait around for someone to step up to the plate. We are called to be prophets. We are called to be disciples. We are called to be leaders in our faith. So, I think it's important, for this Fortnight for Freedom, to really speak our minds in what we think of our beautiful Catholic faith," Perdomo said.