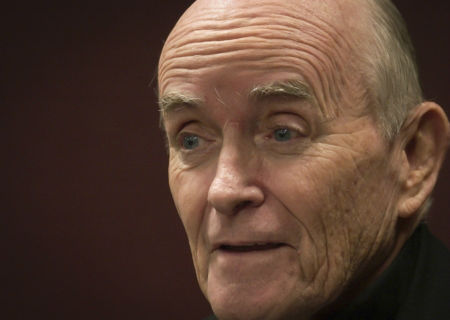 Father Andrew Greeley, American sociologist and prolific best-selling author, died May 29 at his home in Chicago. He was 85. Father Greeley is pictured in a 2003 file photo addressing a Catholic gathering in Chicago. (CNS photo/Karen Callaway)

CHICAGO (CNS) -- Father Andrew Greeley, a Chicago archdiocesan priest and well-known novelist, journalist and sociologist, died late May 29 at his home in Chicago's John Hancock Center. He was 85 years old.

Father Greeley was perhaps most widely recognized for the more than 60 novels he wrote, some considered scandalous with their portraits of hypocritical and sinful clerics. But he also wrote more than 70 works of nonfiction, often on the sociology of religion, including 2004's "Priests: A Calling in Crisis."

The title notwithstanding, the research he presented in that book found that priests are among the happiest men in the United States -- a conclusion that mirrored his own experience.

"Andy loved being a priest, and he spoke very positively about the priesthood," said Father Greg Sakowicz, who was pastor of St. Mary of the Woods Parish in Chicago for many of the years Father Greeley filled in at weekend Masses there.

"His Masses were very personal. He would name the altar servers and have the people applaud for them," the priest told the Catholic New World, Chicago's archdiocesan newspaper. "Families with young children loved his Masses, because they almost had a backyard picnic flavor to them, it was so personal and warm."

On the other hand, Father Sakowicz said, people who prefer their liturgy to have more structure did not enjoy them so much, but that was all right with Father Greeley.

"You either loved him, or you just shook your head," Father Sakowicz said, repeating a line often said -- and acknowledged by Father Greeley -- that he never had a thought that went unpublished.

"He dedicated his life to research, writing and speaking," the cardinal said in a statement. "In his last years, the words he could still respond to were prayers, especially the Eucharist. We should keep him in our prayers now."

Visitation for Father Greeley was to take place at Christ the King Church in Chicago the afternoon of June 4 and the morning of June 5, followed by a noon funeral Mass with Cardinal George as the main celebrant. Father John Cusick, archdiocesan director of Young Adult Ministries, was scheduled to deliver the homily. Interment was to be private.

Born in Oak Park, Andrew Moran Greeley attended St. Angela School on the West Side, was ordained a priest for the Archdiocese of Chicago in 1954 and served as assistant pastor or Christ the King from 1954 and 1963, while pursuing postgraduate studies in sociology at the University of Chicago.

In later years, he taught sociology both at the University of Chicago and the University of Arizona in Tucson. Father Greeley spent part of most winters in Tucson and often gave public talks. The Arizona Daily Star newspaper reported that he most recently was there earlier this year, according to his cousin, literary agent Andrew T. Greeley.

He maintained a relationship with the National Opinion Research Center at the University of Chicago from 1982 until he stopped working following a 2008 accident in which his coat caught on the door of a taxicab in Rosemont, leading to a fall that caused a traumatic brain injury. While he returned home after a long hospitalization and rehabilitation, and enjoyed visitors, he no longer appeared in public.

His final book, "Chicago Catholics and the Struggles Within Their Church," was published in 2010.

Father Cusick was a family friend of the priest-sociologist ever since he was assigned to Mary Seat of Wisdom Parish in Park Ridge after being ordained in 1970. Father Greeley's sister and her family were parishioners there, Father Cusick said, and Father Greeley told him, "I'm the priest in the family, but you're the family priest."

It was intimidating at first. "He was larger than life," Father Cusick said. "You're talking about somebody who had a tremendous effect on the American Catholic church. He was a religious sociologist, he researched Catholic education. He researched Catholicism in America in way that nobody else did with so much intensity."

While not everyone liked what he said when he said it, the priest added, most eventually acknowledged that Father Greeley's conclusions were accurate."

Opening a lecture series at Loyola University in 2003, Father Greeley said, "Catholics remain Catholic not because of anything the bishops do, but simply because they like being Catholic -- despite the best efforts of some 'intellectuals' to destroy 'the sense of story and mystery' that has always made the church the church."

About women in the church he added, "It also doesn't help that so many church leaders have been downplaying the role of Mary," said Father Greeley. "I don't think the church as an institution or most of us who are priests respect and reverence women the way we ought to."

Father Greeley was released from archdiocesan duties to pursue his academic interests in 1965, and he remained a priest in good standing. He published his first novel, "The Magic Cup," in 1975, although his most popular books may have been "The Cardinal Sins" (1981) and "Thy Brother's Wife" (1982). In later years, many speculated that his priest/bishop detective Blackie Ryan was a stand-in for Father Greeley himself. Father Greeley denied that, but acknowledged that the "little bishop" was his "spokesman."

In a 2003 interview with the Catholic New World, Father Greeley spoke of the importance of story to the religious imagination, saying he tried with his novels to do what the stained-glass artists of Renaissance Europe did with their windows: to spark the imagination and lead it to faith.

For him, religion -- like life itself - was a story at its roots: the story of the Creator, who loves the world so much he gave himself up for it.

He once said that in his novels he attempted to convey the way the love and grace of God operate in the world and the church.

In 1986, Father Greeley established a $1 million Catholic Inner-City School Fund, providing scholarships and financial support to schools in the Chicago archdiocese with student populations that are more than 50 percent minority.

In 1984, he contributed a $1 million endowment to establish a chair in Roman Catholic Studies at the University of Chicago. He also funded an annual lecture series, "The Church in Society," at St. Mary of the Lake Seminary in Mundelein, from which he received his licentiate in sacred theology in 1954.

He received numerous awards, including the 2006 Campion Award, given by America magazine on a regular basis to a noted Christian person of letters, and the 1993 U.S. Catholic Award, recognizing him for furthering the cause of women in the church.

During the Second Vatican Council he wrote "The Yardstick" for what was then National Catholic News Service, while its regular writer, Msgr. George G. Higgins, was in Rome to assist at council sessions. Msgr. Higgins, who also was a Chicago priest, started the weekly commentary on economic, labor and social problems in 1945.

Father Greeley is survived by his sister, Mary Durkin, and several nieces and nephews.

Martin is a staff writer at the Catholic New World, newspaper of the Chicago Archdiocese.