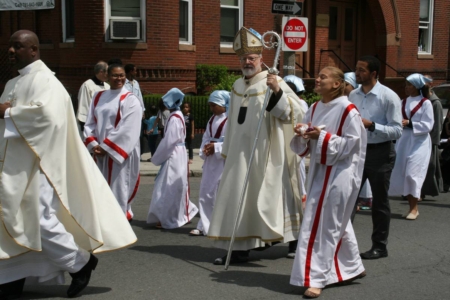 'On Sunday (5/12), I joined St. Patrick's Parish in Roxbury for their Mass and procession honoring Our Lady of Fatima.' Pilot photo/CardinalSeansBlog.org

Recently, I attended a reception at the UMass Club in Boston given in honor of my good friend, Jim Karam. It was held in recognition of Jim's years of service to the University of Massachusetts' board, including two terms as chairman. I have known Jim and his family for more than 20 years, dating back to my time as Bishop of Fall River. In particular, Jim provided great assistance to St. Ann Hospital, the Caritas Christi Health Care System and now he assists with the management of our Catholic hospitals within Steward Health Care System.... Through the years Jim has always made himself available to assist the Church and the wider community, we are deeply appreciative for his always being willing to help others.

Friday (5/10) I traveled to Washington D.C. to attend the American Cardinals Dinner, which is held to raise funds for scholarships to the Catholic University of America. Each year, the dinner is held in a different city, and this year was hosted by Cardinal Wuerl.

We began with Mass at St. Matthew Cathedral and followed by the dinner itself at the Washington Hilton. I am always happy to support this event, which does so much to allow more students to experience the superior Catholic education provided by CUA. This year, I am pleased to say, we raised almost $1.7 million to support scholarships.

On Sunday (5/12), I joined St. Patrick's Parish in Roxbury for their Mass and procession honoring Our Lady of Fatima. This is a very important feast for the Cape Verdean community at St. Patrick's. They do such a wonderful job decorating the Church and the streets and the houses where the procession passes.

Tuesday (5/14), I returned to Washington for the baccalaureate Mass of the John Paul II Institute for Studies on Marriage and Family at the Catholic University of America. This is an institute that was originally established by Pope John Paul II in Rome and a number of satellite institutions have grown up around the world. The president and faculty, including the former head of the Institute, Professor David Schindler, were all there for the Mass, which was held in the crypt of the National Shrine. Father Antonio Lopez, who formerly worked here in Boston, is now the head of the institution. The vice president is Supreme Knight Carl Anderson.

The Knights of Columbus have been wonderful supporters of the Institute, which is such a wonderful resource for Catholic schools, dioceses and family life offices. I have been involved with the John Paul II Institute since its earliest days so it is nice to come back years later to see how they have developed and progressed.

Tuesday (5/14), I met with Karen Clifton, Executive Director of the Catholic Mobilizing Network (CMN), a group formed several years ago in support of the U.S. Conference of Catholic Bishops campaign to end the death penalty. Among CMN's many activities are diocesan and parish programs designed to educate the lay community about the Church's teachings on the death penalty and facilitating respectful and informed discourse within the Catholic community and the community at large. CMN works closely with the USCCB Pro-Life Committee and provides an important service for the Church in sharing the message that the death penalty is a Respect Life issue.