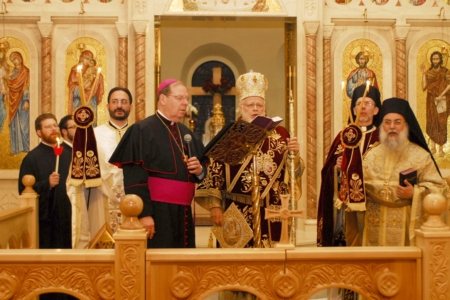 BOSTON -- A tradition of ecumenical outreach continued this year, as Bishop Robert P. Deeley represented the Archdiocese of Boston at the Greek Orthodox Easter Vigil on May 4.

With the cardinal unable to attend this year, Bishop Deeley continued the tradition as a representative of the archdiocese.

Vito Nicastro, associate director of the Archdiocese of Boston's Office for Ecumenical and Interreligious Affairs, said the presence of the vicar general represented a commitment beyond the expression of a personal friendship between the cardinal and the metropolitan -- who led a joint pilgrimage to Rome and Constantinople in 2007.

"The fact that we send a representative even when it can't be the cardinal means that our Church is committed to this relationship regardless and beyond any, however important, warm friendships between hierarchs. Bishop Deeley did a wonderful job of conveying that," he said.

Nicastro said ecumenical outreach of the two churches in Boston date back to the time of Cardinal Humberto Medeiros.

"It is important, maybe more important than ever, to stay committed to nothing less than what our Lord requires, and what He prayed for on the night before he made his supreme self-sacrifice as recorded in the Gospel of John 17:21, when he prayed for us that we might be one, as he and the Father are one," Nicastro said.

At the vigil, Bishop Deeley proclaimed the Gospel and read a letter from the cardinal to the metropolitan.

"Allow me this opportunity to join my voice with yours as we proclaim the Paschal Good News: Christ is Risen! Although my ministry calls me away from Boston at this time, know that I hold you and your esteemed flock in prayer on this holiest of days," the cardinal said in his letter.

Cardinal O'Malley acclaimed not only the ecumenical significance of the exchange in Boston, which Nicastro said began in 1985, but also the significance of dialogue between Catholics and Greek Orthodox in light of recent developments.

"This coming together in unity is a 'fundamental prerequisite,' as His All-Holiness Ecumenical Patriarch Bartholomew shared with the Holy Father, Pope Francis. Let us continue in fidelity to God's will, as Pope Francis replied, 'taking part in an ever-more urgent fashion in the prayer for the unity of all believers in Christ,'" the cardinal said.

Cardinal O'Malley also noted some of the tangible differences made by the ecumenical alliance in Boston recently.

"The Holy Spirit has been present as we joined together in persevering against Physician Assisted Suicide and as we ministered to the city of Boston and the Commonwealth at the recent interfaith service of healing at the Cathedral of the Holy Cross," he said.

Cardinal O'Malley in his letter personally invited the metropolitan "and our Greek Orthodox brothers and sisters" to St. Joseph Parish in Needham for a celebration of vespers for the Vigil of the Feast of Saints Peter and Paul on June 28.

"It is my sincere hope that we can be together at that time," the cardinal wrote.

In closing, the cardinal used the Greek word "koinonia," meaning "communion," to express fellowship with the Greek Orthodox community in Boston.

"With deep gratitude for all that you do to bring our Churches together in prayer I give praise to Christ Our Savior who by his Incarnation, Sacrifice, and Resurrection has incorporated all God's people together into the eternal koinonia of the Blessed Trinity," the cardinal said.