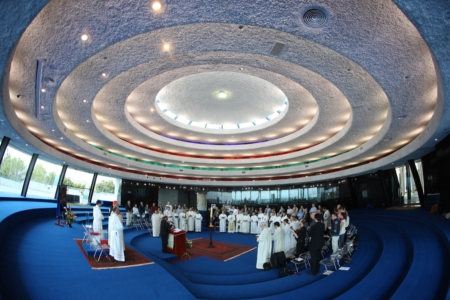 The Domus Galilaeae is a Catholic center of the Neocatechumenal Way on the Mount of Beatitudes. Pilot photo/CardinalSeansBlog.org

Below is an edited version of the April 12 Cardinal Seán P. O'Malley's blog. The cardinal went to the Holy land on retreat with 29 priests from the archdiocese. This week's blog focuses on their visit to northern Israel, where Jesus spent most of his life. The cardinal is expected to write a second post on the trip in his next blog entry.

This week, I have been on retreat with a group of 29 priests from the archdiocese in the Holy Land.

Though we have been planning this retreat for over a year, it comes at an unusual time for me, because I had not been expecting to be out of the archdiocese for three weeks participating in the conclave. However, I think this has been a very important opportunity for me to be together with our priests and to share this experience with them.

Many of them are coming to the Holy Land for the first time and so it is an important moment to support them and encourage their spirituality and fraternity. We are so glad that so many could come.

Coming to the Holy Land is an extraordinary experience, which opens up the Scriptures in a very powerful way for people to understand what we read about in the Gospels and the Acts of the Apostles. It provides an opportunity to actually visit the places where Jesus walked and experience the culture, geography and history of the people that inhabit this part of the world that is such an important place for Christians, Jews and Muslims. For us it is an extraordinary way to appreciate the Gospels and Jesus's life and works.

We began our pilgrimage arriving on Monday night at the Domus Galilaeae, a Catholic center of the Neocatechumenal Way on the Mount of Beatitudes. It overlooks the Sea of Galilee and is very close to Capernaum, the ancient ruins of Korazim and the place where Jesus performed the Miracle of the Loaves and Fishes.

Just as the Gospel begins with a call to conversion, our retreat began Tuesday morning with a penance service with all of our priests as well as several lay people who were there, many of them from Boston, on another pilgrimage.

After the Penance Service, we had a "scrutatio" or "scrutiny of the Word of God," which is a Lectio Divina, within Domus Galilaeae.

The Domus Galilaeae has become quite a point of contact with the Jewish faith, in great part because Kiko Arguello, one of the initiators of the Neocatechumenal Way, has always emphasized the Jewish roots of Catholicism. Therefore, the Jewish people have found themselves at home there.

One example of this would be the room where the scrutatio takes place, which is very much like a yeshiva, the Jewish monastic setting to study the Scriptures.

Then, in the afternoon, we went to Nazareth where we visited the Basilica of the Annunciation.

While the priests were visiting the Basilica, I walked over to the nearby Poor Clare monastery where Blessed Charles de Foucauld had lived for three years at the turn of the 20th Century. There is still one nun there who knew him personally.

(I visited) the original Poor Clare monastery where he actually lived. Now the sisters live in a modern building and the Brothers live in the old building. There is also a school there because this was much too large for the present community.

From Nazareth we went to Mount Carmel. At Mount Carmel, we had a Mass together with the priests at the Stella Maris Monastery.

On Wednesday, at Caesarea Philippi, we visited the pagan temples where Christ asked Peter, "Who do you say that I am?" And Peter says, "Thou art the Christ, the Son of the living God" and Jesus said in response to him, "You are Peter and upon this rock I shall build my Church." So, this is certainly a very important place for Catholics, as well as the place where the Jordan River actually begins.

Father Francesco Voltaggio, who is a Scripture scholar and a professor at the Redemptoris Mater Seminary in Domus Galilaeae, gave us spiritual reflections on the holy sites throughout the trip.

We were also blessed to be able to visit Capernaum.

Capernaum is where St. Peter lived and also the site of the synagogue were Jesus gave the sermon that appears in Chapter 6 of St. John's Gospel in which he says "I am the bread that came down from heaven."

In each place we gathered, we would read a passage from the Gospel related to that site.

We also visited the church called the Mensa Christi, Latin for the "Table of Christ." Here is where Jesus prepared breakfast for the apostles in the shores of the lake and he asked Peter, "Do you love me?" and told him to "Feed my sheep."

This is a picture of the Redemptoris Mater Seminary, which is on the Mount of Beatitudes.

Below this statue of Jesus giving the Sermon on the Mount is the Blessed Sacrament Chapel, which is the fulfillment of Blessed Charles de Foucauld's wish that there be a chapel built on the Mount of Beatitudes where there would be perpetual adoration.

Thursday, we had a tour of the library at Domus Galilaeae.

There, Father Francesco spoke about the Torah kept in the library, which was a gift from the Archbishop of Brussels. It is over 300 years old.

Also, on the walls of the library is an inscription of the Sermon on the Mount in Greek, Latin, Hebrew and Arabic.

I also couldn't help but take notice of this -- I think every library should have one of these signs. It says, "There is excommunication reserved for the Holy See for anyone who takes a book from this library without permission."

I have one of these in my own personal library, it was a gift from my sister. My theory is that the first two hours of Judgment Day are going to be dedicated to having people return borrowed books!

And some of our priests crawled through a representation of the "narrow gate" of Scripture.

From Domus Galilaeae, we went to Mt. Tabor, where we celebrated Mass with the priests at the Church of Transfiguration. The church there, in a way, embodies the humanity and divinity of Christ that is revealed in the Transfiguration.

In the upper church there is a beautiful mosaic of Jesus appearing with Elijah and Moses.

From Mount Tabor, we went to the place in the Jordan where Jesus was baptized and we had an opportunity to renew our baptismal vows there.

On the way back from Mt. Tabor, we passed the desert and that is where the local Bedouin merchants sell camel rides.

At another stop they were selling these spiffy headdresses.

On the way through Jericho, we took this picture of the Sycamore tree, which is what Zacchaeus would have climbed to see Jesus.

The next stage of our trip takes us to Jerusalem.

I look forward to sharing my reflections on the remainder of our pilgrimage next week.