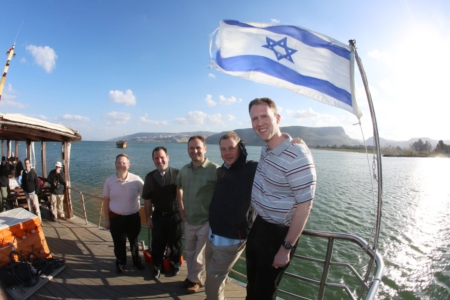 Cruise of the Sea of Galilee. Pilot photo/CardinalSeansBlog.org

Below are excerpts of reflections of some of the priests who participated in the Holy Land retreat with Cardinal O'Malley. The reflections focus on the first three days of the pilgrimage.

Our day began waking up at the Domus Galilaeae, a place for pilgrims operated by the NeoCatechumenal Way and overlooking the beautiful Sea of Galilee. I could almost see Jesus preaching His famous Sermon on the Mount to thousands of people: young and old, rich or poor, healthy or sick. In fact, this is where Jesus spent so much of His ministry, including where he called his first apostles, Peter, Andrew, James and John, to be "fishers of men."

And as a current member of the faculty at St. John's Seminary in Brighton, I could not help but spend much time early in the morning praying for each of our own seminarians. Several had already requested I pray for their vocation here, asking the Lord Jesus to strengthen them and guide them.

Our afternoon took us through the area of Cana to Nazareth, the place where Mary and Joseph grew up, although to my surprise there is no exact known place for the first public miracle of Jesus turning water into wine, I found myself praying for the over 140 couples I've had the privilege to marry and for the marriages of many family and friends. It was also the desire to pray to Jesus, Mary and Joseph to give strength and healing to any separated or divorced couples, knowing how painful such situations often remain.

... we visited Nazareth, and the Basilica of the Assumption. The experience was primal. This one place, remarkably well attested, is the single place on earth where the Word became flesh, and everything changed.

One enters the basilica on the second level, and there I was immediately bewildered by color. In every part of the second level, the walls are covered with images of the Virgin Mary -- gifts from just about every country in the world -- huge, floor to ceiling images. In these images she looks like all the peoples of the world: here, an African; there, an East Asian; there again, a Slav. In the image from the United States, appropriately, it is impossible to determine her ethnicity, as her face is almost abstract, representing all of the peoples of our nation. Color everywhere. Light everywhere.

Then we descended to the first floor of the basilica. There one finds an archeological dig; the Franciscans have been great archeologists. One finds unearthed the remains of a grotto and a small, simple altar, with a mark on the floor in front of it. Since very early in the second century, only a couple of generations after the event itself, (like being told by your grandparents that thus and such happened right here), Christians have venerated this spot as the site of the Annunciation.

And so I knelt down -- we all knelt down -- holding onto an iron gate less than ten feet from the place itself. Who am I to have been there? I felt very small. I also felt very disconnected from time. I have no idea if I was there five minutes or two hours (though the actual time was quite short) -- there was no time there. Using C.S. Lewis' phrase, there I felt an overwhelming (literally) sense of "All moments are now."

We drove north for about an hour and a half along the same road traveled by a man named Saul nearly 2,000 years ago. That man, changed by his encounter with Jesus Christ along that road, became a powerful instrument of God by preaching the Gospel to virtually the whole known world of his time. It was almost surreal to be on the same road as Saint Paul, and I pray that he intercede for all of us priests on this pilgrimage, that we also be powerful and humble instruments of God's grace in Boston.

When we arrived at Caesarea Philippi, we had a beautiful preaching on the significance of the location based on the sixteenth chapter of the Gospel according to St. Matthew. In this passage, Jesus asks the disciples who properly say that he is and then also asks the question, "Who do you say that I am?" Peter answers, "You are the Messiah, the Son of the living God." The priest, Father Francesco, who gave us the teaching, made many points about how this Gospel passage is significant because of the location. For example, the place where Jesus asks the question and then renames Simon to be Peter was the site of popular pagan temples built into a rock formation. Peter, whose name of course means "rock," is the one on whom Christ will build his Church. Jesus, I think, was making it clear that the pagan temple and its false gods and worship would not lead to fulfillment but that following Him and associating oneself with His Church does.

Today we stood at another threshold. In Capernaum we visited the home of Simon Peter, Apostle, fisherman, and friend of the Lord. Archeological studies confirm that the ruins here are of a very early Christian Church built on the site of Peter's home. While most of the ruins are from the early Church building, the floor below is confirmed to be from the time of Christ. Most stunning to me was the actual threshold of the original front door of Peter's home, which remains visible. We stood there listening to our guide just like the crowds who stood at that doorway two thousand years ago. The young priest standing next to me whispered, "Jesus walked over that threshold."

The home and the threshold of Peter, in some great and simple way, reminded me that what happened in Mary's womb was meant also for me. He became flesh not just to remain in Nazareth, but also for Capernaum and Boston. Through Mary's yes, Christ now seeks to enter into every human experience and situation. He wants to cross the threshold of every human heart. The great mission of Christians is to announce that Christ can be found in Peter's house.

Today, (we) spent a little time on a boat. We went out on an unforgettable cruise of the Sea of Galilee. It was so peaceful and beautiful. I can understand why Jesus spent so much time there. While on the sea, I was contemplating how Jesus would have had, for the most part, a similar view to what I was seeing in that moment. Our tour guide shared with us that although the sea was quite serene for our journey its geographical positioning and the down winds that come from the mountains can turn, without much notice, peaceful waters into rough waves and on occasion raging tempests. That was just the situation for the disciples mentioned in the Gospels where a storm came suddenly upon them to the point that the waves were swamping over the boat making them fear for their lives. The disciples were not able to rest easy until Jesus took control of the situation. The Lord arose from his sleep to rebuke the winds and calm the waves.

As we stopped for reflection in the middle of the Sea, I was thinking of the above story. (It) is famously known as Jesus Calms the Storm. I was reflecting how all the priests on this boat have had to endure storms in their lives that come from the raging winds of our own weaknesses or the violent waves of the trials and tribulations of the people we love and serve. We are tempted too often to fight the storm with our own strength. By doing so, we almost always remain tossed in the winds that blow. However, if we allow Jesus to take over -- and we have to learn this lesson again and again -- we come to see that only he can steer the boat to peaceful shores.

Aside from any theological interpretation, one practical reason Our Lord would have taken only Peter, James, and John up Mount Tabor to witness the Transfiguration is that it is so darn steep. I felt like we were in a U.S. mountain state given its heavy forestation and dangerous winding roads that required mini buses to get up to the top. Those rides are always fun, though the view from the top is pretty extraordinary. One can see across the vast Valley of Armageddon to plains that continue to the horizon.

On a personal note, I can't stop being struck that all these brother priests of Boston have this wonderful gift of an opportunity to be in a pilgrimage with Cardinal Seán in the most significant and holy locations of Our Lord's life. It helps, too, that everywhere we go people's generosity to him allows our retreat to have an up-close and personal dimension. The cardinal's homily focused on our need as priests to be obedient to God's will for our lives. I'm sure it was no accident that this message came at the spot where The Lord strengthened the apostles as preparation for his passion. The lesson is clear: we must trust in the Lord even when we know we are journeying to the Cross with Him.

After we visited the place of the Transfiguration on Mount Tabor we began our travel to Jerusalem. We came first to the Jordan River where John the Baptist baptized our Lord. The spot is known because it is identified in the Gospel as "Bethany beyond the Jordan." It lies in a no man's land on the border with Israel and Jordan. There we sat down by the river and Father Francesco, our guide, gave us a beautiful reflection on our need to be renewed in our Profession of Faith and then all of us priests renewed our baptismal promises and then had the tremendous opportunity to one-by-one bow before the cardinal as he gave us a small bath in the Holy Waters of the Jordan River, renewing our own Baptism. It was a profound experience for all.

We continued our trip to Jerusalem and as we entered we sang the words of the psalmist rejoicing in Jerusalem. Later that evening we had a rooftop tour of the old city and tomorrow we begin to explore it. What an immense privilege! Not only to see these things but to be here with Cardinal Seán and twenty-nine brother priests from Boston and our guides. It far exceeds what I hoped for. I just think of how many hundreds of homilies this will shape in my own life and multiply that by thirty others and I know that the fruits of this trip will be countless for us and so many others in our archdiocese.