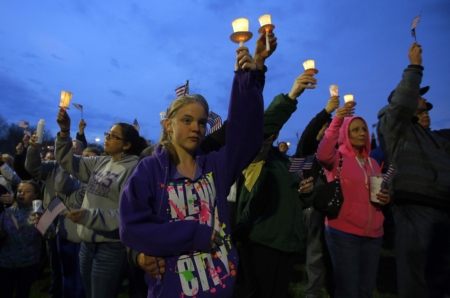 Local residents attend a candlelight vigil in the Dorchester section of Boston April 16, where Boston Marathon bombing victim Martin Richard lived. The 8-year-old boy, who attended St. Ann Parish in Neponset with his family, was one of three people killed when two bombs exploded in the crowded streets near the finish line of the marathon April 15. More than 170 people were injured, including the boy's mother and sister, who were seriously injured. CNS photo/Brian Snyder, Reuters

DORCHESTER -- Over a thousand people converged on Garvey Park in the Boston neighborhood of Dorchester on April 16, to remember Martin Richard, an 8-year-old killed in the bombings at the Boston Marathon April 15, and pray for the Richard family. Martin's mother, Denise, suffered a brain injury and his 6-year-old sister, Jane, lost a leg in the blast.

Two bombs exploded near the finish line of the Boston Marathon, April 15, killing three people and wounding more than 170. The two other people killed were Krystle Campbell, 29, a Medford native and Lu Lingzi, 23, a Chinese national who studied at Boston University.

Richard received first Communion at St. Ann Parish in Dorchester in May of 2012. His father, Bill Richard, released a statement before the vigil.

"My dear son Martin has died from injuries sustained in the attack on Boston. My wife and daughter are both recovering from serious injuries. We thank our family and friends, those we know and those we have never met, for their thoughts and prayers. I ask that you continue to pray for my family as we remember Martin. We also ask for your patience and for privacy as we work to simultaneously grieve and recover. Thank you," said Bill Richard.

Father John J. Connolly, the pastor of neighboring St. Brendan Parish who lives at St. Ann's, led the prayer and spoke at the vigil. The pastor of St. Ann's, Father Sean M. Connor, was with the Richard family that night.

"He asked me to pass on the gratitude of Bill, Mr. Richard, for your prayers, your support, your kindnesses big and small to them, but also to ask you to understand his very eloquent request that was in his statement today that his family be granted the necessary space and time both to mourn and to recover," Father Connolly said.

Earlier in the day, neighbors had done just that. At the family's home in Dorchester, police officers carried flowers, from community members who stopped by, across the perimeter they set up to protect the privacy of the Richard family.

"This audience is extremely beautiful. I wish you could see what we see from here, the candles and the beautiful faces that are coming together for this reason. What we want to say to you is that we are sorry, but also that there are things that we can do to take care of ourselves and our community members," Grey said.

Grey invited anyone at the vigil to speak with counselors walking in the crowd or for counseling in an area organizers set up in the park, regarding any trauma they might have felt in relation to the bombings. He also invited people to contact the commission after the vigil for help coping.

Father Connolly began the prayer portion of the vigil recognizing the emotions of those who held their candles high and waved flags at the park that night.

"Good and gracious God, we come before you this evening with hearts full of sorrow and sadness, anger and confusion. We come before you as residents of a neighborhood who have been touched all too directly by the reality of violence and evil in our midst," Father Connolly said.

"We come tonight as citizens of the United States and citizens of Boston, as residents of Dorchester, because what once seemed to be something we watched at a distance or on television has come all too close to home," he said.

Father Connolly closed the vigil with a blessing.

"May Almighty God bless and console the Richard family, all of us, our city, our Commonwealth, and our country in the name of the Father, the Son, and the Holy Spirit," Father Connolly said.

At the vigil, students from local high schools shared their thoughts with The Pilot.

One vigil-goer saw the boy frequently as he coached a team in the same CYO basketball league that Richard played in. His children played in the league with children in the family.

"He was a great kid who loved life, loved the Bruins, loved basketball, soccer and baseball. I just can't believe that he is gone," Chris Gross, 44, a parishioner at St. Ann's, said.