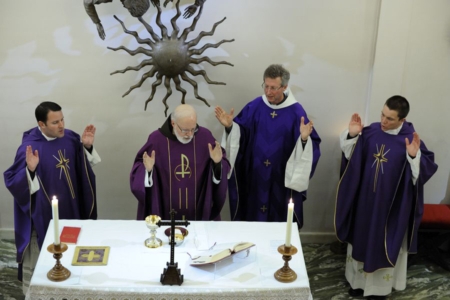 '...in the evening I went to celebrate Mass in the Chapel of the Swiss Guard within their barracks inside Vatican City. The chaplain is a French-Swiss priest, Father Alain de Raemy.' Pilot photo/CardinalSeansBlog.org

...During this past week we were able to appreciate how the Holy Father's simplicity, his love for the poor and his accessibility are going to be hallmarks of his papacy. Even the way he celebrates the Mass is much more like the parish Masses that our Catholic people are used to experiencing in their local churches.

At Santa Anna, where he celebrated Mass on Sunday for the local parish of Vatican City, he greeted people at the door, the way that pastors have done in the United States since I was a young priest. Although, as many young priests here are amazed when I tell them this, when I was growing up a priest never greeted the people at the door. I remember as a deacon being assigned to St. Matthew Cathedral and Msgr. Kuhn walked to the back of the church after Mass to greet the people. I remember being embarrassed at first, but now this has become a wonderful custom, that though it was begun by the Protestants, it does give people that moment to encounter their parish priest and begin to know him, and for the priest to begin to recognize his parishioners. The Holy Father did that at Santa Anna, which I think shocked the whole world.

Also, during the course of the week, I had written the Holy Father a note and asked my priest secretary, Father Jonathan Gaspar, to take it down to him at the Domus Santa Martha, since the Holy Father has not yet moved into the Apostolic Palace. And I said to Father Jonathan, "I want you to give this letter to someone who will put it into the Pope's hands. I do not want it being passed from person to person." So, when Father Jonathan got to the Domus, he spoke to the receptionist at the desk, who said that if he left to the note with her she would have to give it to someone else and then she did not know what route it would take before it got to the Holy Father, but she said that she would call the Pope's secretary, Msgr. Alfred Xuereb.

That is just another indication of the directness, informality and warmth of the Holy Father which, for many, is very disarming and, at the same time, very refreshing. Of course, all of us are very concerned and we want him to be safe. We can understand that in today's world someone in his position cannot be as available as perhaps he would like, but certainly we see the Holy Father's intention is to be close to the people.

During the weekend, though I could not be present, I was happy to participate at least through Skype with two vocation discernment retreats that were going on in the archdiocese. Friday and Saturday I gave a conference to the men at Blessed John XXIII National Seminary and to the men who are at the Marion Center as part of the vocation retreat sponsored by St. John's Seminary. There were more than 60 young men who run these retreats. Msgr. Jim Moroney gave the talks that I had planned to give, and they also had a talk from the rector at Blessed John Seminary, Father Bill Palardy.

On Monday, Congressman Chris Smith and Congressman Jeff Fortenberry and his wife Celeste came right from the airport to see me. Both representatives are great champions of the pro-life cause in Congress. We had a wonderful meeting. They were part of the congressional delegation attending the Holy Father's inauguration Mass, along with Congressman Lipinski who is the head of the Pro-Life Caucus in Congress. Marie Smith is also very involved nationally with the pro-life cause.