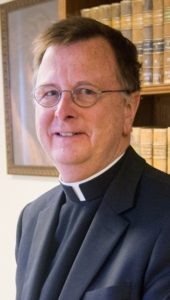 BOSTON -- Jesuits in Boston welcomed the March 13 election of Cardinal Jorge Mario Bergoglio as Pope Francis, the first Jesuit to ascend to the papacy.

"To have a Jesuit as pope, of course, it is a surprise. It never having happened before, I didn't expect it to happen," he said.

"Second, it's an occasion for gratitude for a spiritual life that was nurtured and formed in the Society. It has brought forth such goodness that this man has been chosen to be the Holy Father," Father Sheehan said.

Father Sheehan said he anticipated the papacy of Pope Francis as a period of rebuilding the Church, and that his choice of the name after St. Francis of Assisi signifies his commitment.

"I think that that signifies the Holy Father's hope that Christ will help him build the Church in this age, in a way that is constant with St. Francis' example," Father Sheehan said.

Father Sheehan said the election calls people with Ignatian inspiration to a reminder of God's work in the world.

"For people who follow an Ignatian way of spirituality or who are inspired by that spirituality of St. Ignatius it provides a reminder of the importance of finding how God is active in our world. I think it is a call for deeper contemplation of how God is calling and asking us to respond in a variety of ways," he said.

Though Father Sheehan expressed joy at the election of a Jesuit, he also explained that once a priest becomes a bishop, particular restrictions in any order are removed.

"Once a Jesuit becomes a bishop, he is no longer under the regular structures of Jesuit obedience. That is he wouldn't answer to the provincial, or be under obedience to the superior general of the Society," Father Sheehan said.

Father Sheehan said though the bonds of friendship with the order remain, the structure of the Church means that the pope has authority over the Society of Jesus.

"The Holy Father is the head of the whole Church and the Society of Jesus answers to him," he said.

He said the new pope's name is a great sign of unity for the Church.

"It's an example of a way in which the Church has tremendous pluralism, with a number of different religious families, but different inspirations. It's a little bit like a choir where you have different voices, but they are all singing the same song," he said.

Also that day, Father Tom Smolich, SJ, the president of the national governing body of the Society of Jesus, the Jesuit Conference in the United States, was in Boston to speak at an event organized by the young adult group Jesuit Connection.

Father Smolich said he also felt surprised by the news of a Jesuit pope elected the day before.

"I was speechless. My friends would say, 'Tom is rarely speechless.' I still am kind of in shock," he said.

He also explained that upon ordination as an auxiliary bishop in Argentina before becoming an archbishop, Pope Francis technically stopped being a Jesuit.

"While Pope Francis is a Jesuit in spirit, and clearly just from some of the things he has done is very, very deeply a Jesuit in the spirituality, technically he has not been a Jesuit since 1992. That's how he can still be, in a sense, our 'boss' and not be a part of us, but we are still happy to claim him," Father Smolich said.

Father Joseph O'Keefe, SJ, a professor of education and director of the Center for Ignatian Spirituality at Boston College, made a comparison between Pope Francis and Boston's own Capuchin Franciscan Cardinal Seán P. O'Malley.

"From my experience of Cardinal O'Malley a kind of a warmth of personality, a sense of humor, kind of engaging people that way, and certainly it seems Pope Francis from what we have seen has a lot of those same traits," he said.

Father O'Keefe said he anticipates Pope Francis running the Vatican with a level of openness comparable to how Cardinal O'Malley runs the Archdiocese of Boston.